Production of a Western Adaptation of The Peach Blossom Fan 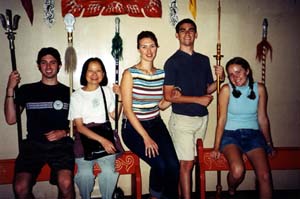 Literature being my field of discipline, my study of traditional Chinese drama and stage performances had been mostly one-sided-watching from the audience seats-until this past summer. The ASIANetwork Freeman Student-Faculty Fellowship gave me an opportunity to study the performance of the traditional Kunqu Theater from the other side of the stage, the back stage. Most master works of classical Chinese drama were performed in the Kunqu style, which explains why better understanding of Kunqu performance is crucial to my study and teaching of classical Chinese drama.

The process in which my students and I learned to produce a Kunqu performance is another experience that will have great impact on my career. Learning to do the actual stage movements was much more difficult than I had anticipated. We were greatly frustrated in the beginning, but struggled to move on. In the second week we started to make some progress, which made us feel better. We practiced stage movements while singing a Kunqu song we translated into English and accompanied by our own musician playing the Chinese flute. We put on the costumes with the long, hanging “water sleeves” and practiced more complicated movements. We organized a better orchestra by adding the clappers and a drum and had fun playing with them. Our progress stunned all the teachers. Soon we found the Media Manager of the Theater and a crew from China’s Central TV Station following our practices for many days. By the time we left Beijing, we were confident we could produce our English version of The Peach Blossom Fan back home and exhibit, to a certain degree, essence of the Kunqu Theater.

I am amazed by how much one month can change the way in which I look at myself and the world. Learning about Kun-Opera with the North Kun-Opera Troupe introduced me to a side of Chinese culture and tradition that I had never experienced. I was exposed to a long standing traditional art form as well as a budding experimental theatre scene. Interacting with and getting to know actors, directors and designers expanded my view of what my future path could be. After returning from China, I start my sophomore year at Whitman College with a different attitude and outlook than I did before.

Relatively speaking, a month spent studying any form of theatre is a rather insignificant amount of time, particularly when the form studied is so utterly foreign to the traditions of our Western theatre heritage, and when most performers in this theatre devote their whole lives to mastering the subtle nuances of song, emotion and movement that distinguish their performances from any other. But even so, the time we spent in Beijing and Shanghai studying the traditions of Kunqu, a traditional form of Chinese theatre, has fundamentally affected the way I see theatre. Central to Kunqu’s conventions is the acknowledgement between performer and audience that they are indeed in the theatre, an admission often avoided in realistic Western theatre. This rather simple idea, and all that it implies, makes for a distinct theatre experience that has fueled much of the experimental theatre movements in the West in the past century. It is difficult to say exactly how and to what degree my exposure to Kunqu will impact the theatre I create over the course of my career, but its precision, grace, and beauty will certainly never fail to inspire me.

I must admit that I was a bit prejudiced before I went to China: I expected to see a uniform world of traditional buildings, traditional cuisine, and most of all I expected to see reminders that this was, indeed, a Communist nation. What I learned, however, was that China cannot ever be defined by simple terms and single categories. Despite the continued practice of communism, capitalistic cravings for wealth are alive in China and the numbers of ethnic minorities and European/American settlers offset any notion of a Chinese homogeneity. The traditional buildings that I expected to see around every corner are quickly being swallowed up and replaced by modern high-rises and flashing neon signs. Still, amongst this modernization, there exists a theatre art form, which proves that the traditions of China’s past are not forgotten. Kunqu, which is often thought to be the predecessor to modern Beijing Opera, provided us with hints of what China was like. It is a very elegant theatrical form, which places the emphasis upon the actor’s abilities to represent the scenarios of the story through incredibly stylized pantomime movements, rather than using fancy sets and lighting, as is most common in modern theatres throughout the US and Europe. What a rare opportunity it was to be able to watch-and learn-the techniques and artistry of this unique theatrical style, especially since most people around the world, and throughout China, do not even know it exists!

Studying Kunqu theater in China this summer was a priceless experience for me. I learned to appreciate the value of learning about one part of a culture for developing an appreciation of the whole. I gained a new perception of music as a universal language, which allowed me to learn the Chinese flute without always understanding what my teacher was saying. Our relationship of teachers and students at the Kunqu institute was a rewarding way of achieving cross-cultural appreciation. Our project is special in that we will be able to share what we learned in China through our production of “The Peach Blossom Fan” with our fellow students back home. We hope our audience will be able to experience the essence of Kunqu theater, and develop their own appreciation for it.

We have set a date, October 29, 2002, for a production of 4 scenes from The Peach Blossom Fan in English at the Main Stage of the Harper Joy Theater at Whitman College. We are auditioning Whitman students for 8 roles in the play and recruiting a percussionist to play the clappers and the drum. The production is free and open to the public. A videotape of the production will be presented at the ASIANetwork conference in April, 2003.