The Convergence of Socialism and Capitalism in Urban China 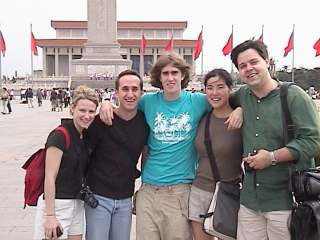 As the faculty supervisor of this research project, I gained a great deal of experience in directing the research program and cooperating with the students. The research benefited my personal research on modern China’s scientific community and the development of professionalism in three major ways. First, the data I collected from Beijing’s Zhongguancun and Sanlitun provided me with excellent sources to analyze the significant interaction between academia and government; and, in turn, it enabled me to examine Beijing as a microcosm of the way that the country as a whole is moving into the twenty-first century’s global community. Second, the summer research also enabled me to develop an interdisciplinary teaching approach in teaching Modern Chinese History by combining history with China’s contemporary development in economic capitalization, political decollectivization, urban revolution, international cooperation, and rapid globalization. Third, by participating in and supervising this program, I learned a great deal about how to supervise American students to survive in a different cultural environment and conduct scholarly research.

In general, through this experience, we achieved one of the chief objectives of mission of Lake Forest College — preparing ourselves as true “global citizens.” To be able to engage in research and cultural exchange in China was truly a remarkable and memorable experience for all of us. On the other hand, our trip to China also stimulated the appreciation of Asian Studies on campus. This fall, there are sixteen students who expressed their interests in selecting Asian Studies as major or minor, seven students registered in beginning Chinese and ten in Japanese, with five students seeking tutorials in advanced language studies, an almost 30% increase overall in East Asian language study since last year. Moreover, one of our team members, Sven Pinczewski, returned to China during the summer and is currently a student studying Chinese language and history at Peking University.

The only place where I felt there was awareness and desire for a public sphere was at Peking University. When we talked with some students during a roundtable discussion, the Chinese students did remark at the lack of opportunity for young people to discuss sensitive issues such as politics and civil society.

Through this experience, we achieved one of the chief objectives of the mission of Lake Forest College. We have truly become global citizens. To be able to engage in research and cultural exchange in China was truly a remarkable and memorable experience for all of us. The opportunity to travel to Beijing has brought to life some of the classroom discussions regarding modern China, and Sino-U.S. relations. I also have a first-hand perspective of the Chinese people, government, and economy. Participating in the various cultural experiences was also truly a delight, and I enjoyed these opportunities. The differences between American and Chinese culture are clear, yet I believe that there is a mutual understanding and respect for one another that I was unaware of until my visit. I am positive that I will be able to intertwine my experiences in Beijing throughout my life and career.

Beijing is a huge city, we visited Tiananmen Square, Forbidden City, Ming Tomb and other famous historically scenes. It connected to what I have learned in the class in Lake Forest College. Professor Chen explained some of the historical events accompanying those buildings. First-hand knowledge amazed me about how China’s history had been presented through those distinguished buildings. I would sometimes picture myself in a moment of history, and my curiosity about China’s development raised more than ever.

The trip focus was to study China’s development through two major streets in Beijing. In Sanlitun bar street, we observed people’s appearance, regions, and status in their workforce. We found that most of them on that street were from western countries. One could also see some Chinese, according to their dress and behavior, more than likely they are executives within their company. Most of them spoke another language other than their native language. Another street we observed was Zhongguancun where most high-technology companies started. Most of the founders on that street had been moved out. Walking on the street, people approached us and asked whether we would like to purchase pirated software. The price range on most of the software was about $0.75 to $1.25. It would sound silly if you really ask them whether the software was real, everything was implied. I could not imagine what a company like Microsoft would think when they see their product being sold at percentage of original price.

Personally, our journey to Beijing has greatly surpassed my expectations and to an extent that radically altered my perception of China, Beijing, and the Chinese people. Even though I have studied Chinese history, culture, and language extensively throughout my academic career at Lake Forest College, the different and often contradicting images of China available in the West – ancient traditions, communist legacy, and a booming consumer market – to me always have caused a certain amount of confusion as to what China really is. My investigation of the cultural discourse in Beijing’s Zhongguancun and Sanlitun areas has helped me greatly to put the different pieces of the puzzle together and gain a clearer view of the realities of China’s cultural environment at the beginning of the 21st century.

While the dedication to cultural preservation was apparent among the majority of our interview subjects, the assertion of individual choice and freedom appeared as another compelling trend in contemporary Chinese urban society. China cannot be told by the West what does and what does not benefit its economy and culture – it is the Chinese who decide what is best for themselves and what makes their country strong. Likewise, on a personal level, it is the individual who decides independently what goals and paths to pursue. What is often ignored, however, is the fact that this fascination with independence and individualism also has its downsides. The Chinese are very dedicated to the creation of a “new” China, that – while borrowing heavily from Western advancement – exists independently and assertively in its own, rightful place within the global system. Those who are left behind in their dream of a strong China built on the achievements of private entrepreneurship and personal realization, however, the poor, the unemployed, the migrants from the countryside, might find that in today’s Beijing, this booming metropolis that can easily offer the same commodities as Singapore, New York, or Paris, their rightful place will depend more and more on their ability to fend for it.

In the three weeks I spent in Beijing, it was particularly difficult to have any solitary moments for reflection. I mean aside from every day jam packed with interviews, handing out questionnaires, taking pictures, and other research activities to keep me busy, there were literally people everywhere.

I didn’t start speaking Mandarin really until the plane ride down, but I still went out of my way to try and speak with just about everyone I could. And these conversations that I engaged in, are to me, probably what I cherish most from the trip. Although my Chinese was terrible, people were always patient with me and tried their best to figure out what I was trying to say. That’s probably what made me sort of fall in love with the people of Beijing.

At Peking University, we had a round table discussion with students concerning politics, culture, and language. We were genuinely surprised by the way they believed that not only were we wrong for treating their people in a certain way, they believed that we were in some way responsible for the treatment of their people in a certain way. This surprised me. I had always believed that young college students took it as a given that most young people do not directly affect policy in the worldwide arena. It is possible that they didn=t really think that we had done anything wrong, but they were convinced that we believed in things that were universally wrong because we were Americans. The amazing things that happened however was that by the end of the conversation not only had all sides been assured that we were all in agreement about what was wrong with the world, but that we realized just how similar we all were. We had our biases for our country over another, or for our way of life, but at the essence we all just want the same simple things: Family, a career, friends, happiness.

My experiences in China have not only profoundly affected the way I look at the world, but more importantly the way that I think, and the way I do the things I do.

We discovered that the globalization is not a one-way process in China’s economic development. The adoption of foreign culture and economic system must be incorporated within the Chinese local environment in order to thrive. When we drafted our research proposal on China’s consumption, we raised a hypothesis that China’s economic pattern in commercial development had been under a complete influence of Western culture. During our interviews with Chinese entrepreneurs and representatives of foreign joint ventures, however, we discovered that they always insisted that they wanted to establish themselves as local companies. A similar occurrence can also be observed in the Sanlitun District, China’s “Time Square,” with its innumerable bars, nightclubs, and restaurants served with Chinese style of food and management. From a cultural point of view, this feature of management reflects a trend of localization, which marked the transformative process of China’s incorporation into the global systems. A theory of local-global nexus, therefore, can be developed to analyze the unique pattern of Chinese modernization or Westernization, that underscores our research topic, the convergence of socialism and capitalism in urban China. Moreover, we discovered that the sentiment of localization is closely associated with the rise of Chinese nationalism. It is not only characteristic of economic leaders; it also is prevalent among the new generation. During our discussion with students at Peking University, one student explained that globalization in China moved in three stages: the first stage was learning from the West, which was perceived as being more scientific and more advanced. In the second stage, the new knowledge would be integrated into the local tradition, to enable China in the third stage to become “perfect” — to find its place within the global system without compromising its rich cultural heritage. This statement reflects the complexities of the Chinese psyche as they try to become global citizens while still remaining Chinese.