The Dances of Han Dynasty

Chinese wisdom states that “Walking 3,000 miles will allow you to learn more than reading 30,000 books.” This year’s research trip with four Colorado College dance students to Chengdu, China to explore the history of Han dancing exemplified this ancient saying. Although I had been taking students to Taiwan and China for the past nine years, this year’s trip was the most intense and arduous and, perhaps the most memorable. I was given the opportunity to explore both cultural and personal differences as I worked to unite my team of sensitive individuals beset by heat, dissention and illness. Our journey through the ancient tombs and temples of Chengdu as well as our preliminary work in Colorado College with two Han Dancing master teachers from Yunnan brought renewed strength to our dancing and our sense of purpose for the trip. In Taiwan and Hong Kong, the dancers experienced the dichotomy of contemporary life juxtaposed with ancient rituals. In China, the students learned both the aesthetic of Chinese dance, with its long sleeves and delicate spine, and the reality of life in China, which can only be described as both difficult and moving. 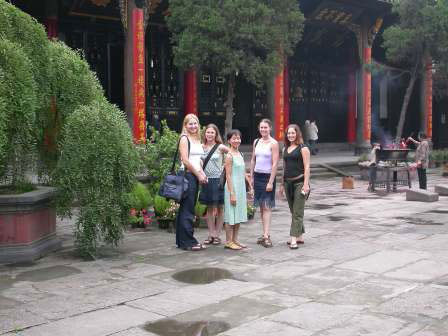 My trip to Asia affected me in many more ways than I had assumed it would. I thought I was going to Taiwan and China to learn about Han dynasty dancing; what I really learned was that Chinese culture permeates everything in their daily lives, including their style of dancing. The movements of the dances are indirect, as are the other ways of communication of the Chinese. The tilting of the head and the shape of the hands date back to way before the United States of America knew what culture was. In short, the experiences I had in Asia are invaluable and unforgettable.

Before receiving the opportunity to study Han Dynasty dance, I thoroughly enjoyed learning Chinese dance and thought it was beautiful, but I didn’t understand the emotional or cultural significance. After landing in China, I noticed how the architecture, the land, the values, the history, the art, the crafts, the music, and the dance were all so closely connected. Had I not had this experience I never would have understood the emotion and motivation behind the intricate movement. I walked away from this experience with a new sense of the world and my place in it. As a dancer I believe that every new kind of dance form that’s experienced and learned will aid in the growth process as an artist. This grant gave me the opportunity to do that at a deeper level than I ever thought was possible.

Through our research of Han Dynasty dance, we’ve discovered the connection of the Dance to the context in which it was created, the historical significance of the Han Dynasty itself, patterns within the dance, and its cultural importance and meaning today. The context includes architecture where we found movements representing the pagodas and found a circular theme in both the architecture and the movement that reflected the belief in a continuous life. We also found the theme of reaching upward to the heavens in the mountainous surroundings and in the upward movements in the dance. We discovered that Han Dynasty itself was known for embracing the arts, which made it the perfect time period for our dance research. Within the dancing itself we discovered common movements and repetition that all natives of the country recognized. As it relates to today, we found that Han Dances are important to learn and refine in the culture of today that cherishes the historical significance and connected emotions.

After spending nearly six weeks submerged in an Asian culture, I am beginning to realize the profound repercussions of my journey. As far as dance is concerned, I learned in Asia what I could have never learned here in the states. I was lucky enough to both watch and perform traditional and contemporary performances of all genres. My view of dance and performance will never ever be the same again. I find myself ready to choreograph using new and different ideas. I know that experiencing the culture also increased my perception of the history of that part of the world. Even though Taiwan, China, and especially Hong Kong are becoming increasingly modernized, there are some cultural aspects that really stand out to me. I was exposed for the first time ever to the practice of Taoism and Buddhism beliefs. Perhaps the most striking aspect of Chinese culture that I became familiar with would be that of Chinese medicine and massage. My journey will affect my future learning in a positive manner for years to come.

I know that my experiences in Asia will be with me forever and will not fade into the ever-growing background of my memory. It was a completely wonderful and enriching experience visiting temples, museums, and tombs with our guide and professor Yunyu Wang, for she was a constant source of knowledge in the areas of Chinese language and culture.

The performances I attended and classes in which I participated drastically changed my view of dancing and influenced the direction of my career. While in Asia, I became aware of the fact that dance, culture, and history are so interrelated that they are nearly inseparable. Upon my return to the U.S., this realization led me to notice the same of my own country and inspired me to share my experiences with my community. The most important observation of my trip to Asia is that dance truly is one of the few forms of cross-cultural communication that exists, which has motivated me to learn as much as I can about the different dances and cultures of the world.

Under the direction of Professor Yunyu Wang, the Colorado College Touring Dance Troupe will begin performing the three dances we learned while in China for educational purposes. The Dance Troupe has been invited to perform at the Colorado College Homecoming celebration, several elementary schools, and local ethnic festivals. We will not only perform for our audiences, but also educate them on the basics of Chinese culture, history, architecture, and movement through discussion both before and after demonstrating our dances.

A second way to share what we learned in China is to put each of the dance pieces that we have learned into our three different Senior Dance Thesis performances.