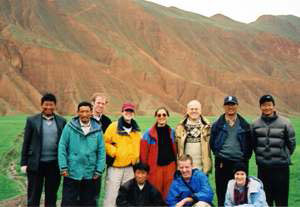 The John Carroll University Freeman Student Faculty trip to the Sino-Tibetan borderlands was an outstanding success. Students came from five different disciplines, all different from the faculty mentor’s traditionally defined field. This diversity of students offered me the opportunity to explore and explain different dimensions of the region, and required that I cross traditional disciplinary boundaries. It was a terrific pedagogical experience, one that will serve me well in my classrooms, where I regularly encounter students from different disciplines and with different interests. I had a similar experience in terms of my approach to research on the region. Though I am in a department of religious studies, my research is on the social and political history of the major regional Buddhist monastery and its support community. I was able to focus on different methods in the study of religion and the role of religious institutions in cultures. 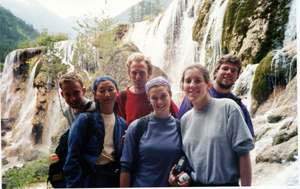 This trip fulfilled my biggest childhood dream-visiting China. Even better than visiting, I had the opportunity to experience China to the fullest. While there, I interviewed top university professors, trained with wushu masters, and performed traditional dances with Tibetans. I walked parts of mountains where hundreds of Buddhist pilgrims walked every year. I saw parts of China that very few westerners have stepped foot. These experiences reconfirmed my desire of wanting to continue to study China and its people more in depth.

Research abstract: The concepts of health and wellness of western medicine are quite different than those of the Chinese and Tibetans. The Chinese and Tibetans rely on century-old concepts with roots of Daoism, folklore, and Buddhism. Although these roots seem quite different, these beliefs overlap each other in the way health and wellness are viewed. Chinese and Tibetan medicine tend to treat the entire person rather than just symptoms. Both disciplines of medicine use the natural world as a model to explain wellness and sickness that occur in humans. Through many interviews, both formal and informal, and an extensive bibliography, a sufficient amount of information was gathered for this project. Interviewees ranged from wushu masters in Beijing to Tibetan nomads in Gansu province. To further my knowledge of this project, I am currently taking Chinese philosophy, Chinese medicine, and wushu at The Beijing Center, in Beijing, China. These three disciplines will surely strengthen my understanding of the project.

I write here about my thoughts, feelings, and images of my excursion to China through both group and personal experiences. The experience was one of many the extremes that our group saw while in China. My areas of concentration were the political differences between China the United States, the socio-economic disparities between modern Chinese cities and the rural areas of the Sino-Tibetan borderlands, the variances of the presence of religion in Tibet and China, and the natural differences of climate and the impact of these conditions. I conclude with my reflection on how this trip has impacted my life and mention my immediate involvement with East Asian culture upon return to the United States.

Research abstract: My research was on the effects of Chinese rule of law, a policy dominated by CCP ideology, which blends Marxism and Leninism, and on social, political, and religious life in the Sino-Tibetan borderlands. Three specific areas of study were the focus of this research. First, I discuss the political autonomy in China and explain how the CCP is able to control all government decisions. I will show how administrative decisions are made to allocate resources in a way that helps urban areas and lags behind in rural regions. Second, I will demonstrate certain ways how the Chinese government restrains religious freedom within Labrang Monastery and its surrounding communities. I will also explain how Chinese rule of law not only contains other ideologies, but also attempts to assimilate the Chinese citizens to its beliefs. Finally, I will highlight how Chinese rule of law has impacted nomadic lifestyle. The CCP has in some ways restricted Tibetan nomads from freely roaming the Tibetan Plateau.

Therese Anne Matthews
“How Do You Call Yourself?”

My experience in the People’s Republic of China may be best summarized as experiencing extremes in degrees of modernity, modes of transportation, lodging, geography, and climate. I greatly enjoyed meeting and interacting with several diverse groups of people in the PRC. After having completed the trip, I have an even greater desire to learn about peoples who live beyond our borders. In effect, I feel as though I have become what philosopher Martha Nussbaum terms a “world citizen.”

Research abstract: My field research focused on the issues of self-concept and self-identity of the peoples of the Sino-Tibetan borderlands. The Chinese Communist Party has made obvious efforts to integrate and assimilate ethnic Tibetans into Han culture and society. However, ethnic Tibetans, by and large, consider themselves fundamentally different from the Han; this aspect of self-concept obviously inhibits assimilation. Furthermore, the extent and degree to which the CCP has been successful in its attempts to assimilate varies across the various regions and provinces of Tibet.

Michael Patrick Pratt
Life, Death, and Life After Death in China: A study in Diversity

My month long trip through China and Tibet has had a significant impact on my views of the Tibetans and Chinese, as well as on my goals for the future. The trip forced me to realize that I unknowingly carried a number of misconceptions, and to reject them. Before the trip, I considered Tibetan culture to be simply a subject of academic study. Through firsthand exposure to the culture, I realized that the culture was much more than something to be studied, but a real vibrant culture that is one of the world’s great civilizations. Firsthand experience also made me realize that cultural baggage resulted in my expectations of the Chinese to be educated only in Communist propaganda and unable to think and speak for themselves. Naturally, this preconception was shattered by the reality that the Chinese can be just as freethinking, well educated, and well spoken as anyone else. These two realizations also caused me to clarify my academic goals. By specializing in Tibetan studies, I may be able to, in some small part, help change the Chinese perception of the Tibetans and, therefore, prevent the loss of an invaluable society. Finally, on a very personal but still important level, this trip has left me with amazing experiences that otherwise I would never have been able to even imagine.

Research abstract: The inevitability of death requires, quite simply, that it be dealt with. Chinese and Tibetan cultures, although intertwined, respond to death in considerably different ways. In China beliefs and practices regarding death are nonsystematic, and in some cases, contradictory. In large cities, beliefs and practices are usually thoroughly modern, and, as a result of religious suppression, quite secular. In the countryside, away from the rampant modernization of the cities, more traditional beliefs and practices are followed. Pragmatism and a sense of practicality rule the beliefs. Those beliefs that are useful are retained until they lose their usefulness. Similarly with practices, while some forms of tradition are maintained, they have, for the most part, been replaced by modern, practical alternatives. In Tibet, on the other hand, all beliefs and practices concerning death must be viewed in the larger context of Tibetan Buddhism. As a result, the Tibetans have developed a much more systematic view of death, and the practices to deal with it. Due to the belief in reincarnation, however, much of the common beliefs deal not with death and how to prepare for it, but with the next life and how to prepare for it. Even methods of dealing with the dead are ruled by attempts to influence how one is reincarnated.

Before my trip began, my expectations were primarily limited to learning more about how tourism was comparatively affecting the Tibetan borderlands and highly populated cities. However, after arriving to my destination, visiting various sites, and working closely with my fellow classmates and professor, my aspirations for learning were exceeded beyond my expectations. Also, after visiting numerous monasteries, and talking with many country people, I could not help but question my own faith. My entire life I have always pondered what the “right” religion is. Yet after my stay in China, I realize there is no “right” way. My new outlook is to simply be a good person and that religion is just a branch to get there.

Due to my travels and meetings within China, I now, more than ever desire to be a global citizen. As a result, I have decided to minor in foreign policy, while still majoring in business. I desire to learn more about what is happening politically in the world and work either in our nation’s capital or abroad.

Research abstract: After spending over three weeks in China, I have decided to change my research proposal to focus on how domestic and foreign tourism is affecting Tibetans culturally and economically. With this research, I will try and find a conclusion to the question: Is domestic and/or foreign tourism good for Tibet? or example, by spending one day in the Tibetan monastery town of Xiahe, I could not but be intrigued by the fact that the main street through town was mixed with Chinese and Tibetan businesses. Both Tibetan and Chinese-owned businesses and hotels flourish. After interviewing with a few locals, I found that Chinese domestic tourists only stay at Chinese hotels. And foreign tourists often only stay in Tibetan hotels. In my project, I will research and explain these apparent differences and why they are occurring.

While visiting China, various project ideas and questions sprung to mind continuously. It seems only to be expected that my project’s prospective has changed. However, now my goal is clear. It is to find whether domestic and/or foreign tourism is beneficial to Tibetans culturally and economically. This research will be completed through my eight previous interviews, my experiences, help from my professor and classmates, and, of course, refined with more research that focuses on this topic area. 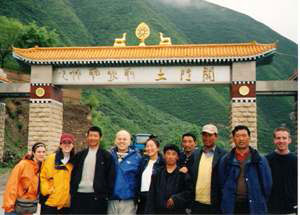 At present we have made photographs and narratives available to several different JCU campus offices. A textual and visual report will be published in our school’s alumni journal. We have made it available to our Public Relations department and expect that news of our trip will be circulated in the greater Cleveland and Midwest communities. We have made materials from our trip available to our school’s Center for Global Education, who will publicize the experience, ASIANetwork, and Asian studies at our school via our school’s website, in workshops on campus, at new student orientations, and other campus and community media. We expect to present our experience to individual classes and eventually in a campus panel discussion.