2005 Student-Faculty Fellows: Sewanee: The University Of The South

The Sociology of Streets in Shanghai 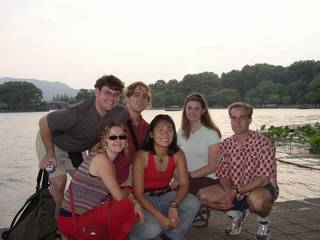 The collaborative research project on street life in Shanghai in most ways exceeded my expectations, but it also provided several challenges. The group included an extraordinary set of students who worked diligently to complete their work, cooperated well, and displayed enthusiasm throughout the trip. The main challenge of the research was fulfilling my role as a team leader. I attempted to allow the students to take full responsibility for conducting the interviews, instead of having students tag along on my research project. By the end, students had become much more successful interviewers, and I am very happy that they have developed such research skills. I walked away from the research experience with a more nuanced and detailed understanding of Shanghai’s neighborhoods and the role of neighborhood organization such as the street committees. By stepping into urban households, I was able to see a glimpse of what Shanghai daily life was like in the past and how it is being transformed by economic modernization. To capture the variety of experiences on the streets under study, I felt compelled to approach strangers for conversations in a way that I typically avoid in Shanghai. Such a process was awkward but very rewarding. My future research and teaching will surely benefit from the work conducted this summer. The personal interviews will provide students in my Chinese politics and Chinese globalization classes with information to show the personal impact of grand changes and the complexities of modernization. The research project reestablished a link to my first (dissertation) research subject, the impact of modernization on social relations and community, albeit my prior research was in periurban Shanghai villages. I suspect that my future research will combine my interest in economic institutions and daily life in China. To balance my work on macroeconomic changes, I will try to delve into the human elements of those changes.

Our research in Shanghai focused on how modernization and the great changes that come with it have impacted the lives of Shanghai residents. We selected four streets on which to focus our attention in order to get a fuller picture of Shanghai. In the course of our work we interviewed people we met on these streets or in shops along the streets, and on all but one of the streets we had the opportunity to interview people in their homes (and were constantly amazed at people’s hospitality). One of the most obvious educational gains for me was an improvement in my language skills. One of the most important realizations for me was the extent to which certain events affected the course of peoples’ day to day lives. It soon became clear during the course of our research that these events framed the lives of our interviewees. The economic reforms of Deng Xiaoping had an extensive effect on people’s lives. Jobs, education, travel, and even ways of thinking, were affected. Our research in China was an amazing experience and reinforced my desire to become proficient in Mandarin and intensified my determination to learn all I can about China. The experience has given me a much better understanding and a much deeper appreciation of the complexities of modern China, which will certainly benefit my studies as well as my future career.

Being an ‘ABC’ [American-born Chinese] made our Shanghai experiences special to me in the sense that our research was delving into the depths of a culture that I call my roots. Reflecting on my time in Shanghai, I see that I gained not only an academic understanding of how economic development, modernization, and Westernization has affected the Shanghainese, but also a more personal understanding of how it has affected my life overseas. Our research experience began in the home of our first interviewee, a middle-aged woman who, after being shamefully laid off from her job in a factory, opened up a successful pizza restaurant in the Fuzhou Lu area. Perhaps what made this particular interview stand out amongst others is that our group later ate lunch at her restaurant and saw firsthand how Shanghai’s development has affected the life of one of its citizens. On days that we did not have scheduled interviews, our group would spread out to different areas on one of our four streets and conduct mini versions of our life-course interview to learn how, why, and when that particular individual came to Shanghai. Through their stories, we gained a bigger, more descriptive picture of the changes in values, aspirations, and lifestyles, as well as thoughts about how life now compares to life 30 years ago. Each of the four streets that we investigated is colored by a slightly different perspective of Shanghai’s overall changing society: the street artist on Fuzhou Lu, Shanghai’s wen hua jie, or cultural street; the young shopkeeper from Zhejiang Province on Renmin Lu circling the Old City; the barhopping bartender from Maoming Lu, one of Shanghai’s central locations for those in search of a bustling nightlife; and the security guard working in the new white collar residence area on Weifang Lu, which was farmland inhabited by peasants just over ten years ago. Five weeks in Shanghai was enough time to confirm my resolution to study cultural psychology and to continue my focus on Asian culture and society when I enter graduate school in the fall.

The research began in Shanghai a few days after we arrived with the construction of an interview questionaire and formal interviews in people’s residences. From the interviews, I hoped to gain a greater understanding of community development as well as gathering a grand picture of social changes in Shanghai through the personal experiences of the interviewees. The interviews went better than I expected. We also conducted what we called “street” interviews, which focused on economic changes and changes to business, whereas the home interviewees focuses more on direct changes in their lives. The project revealed to me multiple viewpoints on Shanghai life. I learned the different hopes and dreams of Shanghai residents of varying economic status. The research also provided me with an opportunity to experience life in China over the last three decades through personal stories of the interviewees. Our group not only learned and enjoyed Chinese culture, but the research experience helped us grow together and create stronger friendships among each other and the Chinese. Having the opportunity to do research in China has changed my goals for the future. I hope that my experience will enable me to participate in more projects and eventually design and lead my own research project in China. This experience has further strengthened my desire to study the Chinese culture as well as develop stronger ties with the Chinese people 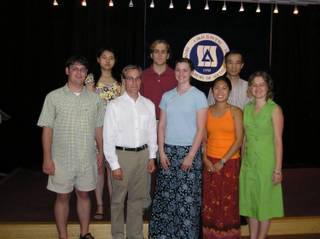 I know the month I spent in Shanghai was one of the most influential and educational of my entire life. Freshman year I enrolled in Mandarin courses, and I had little intention of majoring in a related study, but I knew with my main study interest, natural resources in the environment, there is much need to understand the environmental impacts of the most populous country in the world. The Shanghainese were some of the friendliest and at times the most cheerful people I have ever spoken with. At times it was difficult to tell if we were interviewing them or vice versa, given the equal and earnest interest. My main responsibility during the month was recording the interviews on a little digital camcorder so that we can put together a video of our work. I felt this position was fitting, as I had the most limited familiarity with Chinese culture within the group, but towards the end of the month I was given a chance to interview and it was a wonderful experience. In my opinion, being able to talk to someone that lives on the other side of the planet and has a drastically different life-history from anyone I know, is one of the best learning experiences one can have. It helps you to appreciate your own life, while putting many of your daily choices into question. After my first spark of interest, I have now reached a full-fledged flame which will not expire for some time. My in-class studies on all aspects of China will continue, and if all works out as planned, I will return there next semester for a few months of study.

Prior to our research in Shanghai, I had never been to China. I had longed to visit the area for a long time, and when the opportunity came thanks to a grant from the ASIANetwork-Freeman Student-Faculty Fellows Program, my head was full of questions about Confucianism, universalism and globalization. The goal of our research in Shanghai was to create a mosaic of people’s lives in four different neighborhoods (Pudong, Fuzhou Lu, Renmin Lu, and Maoming Lu), and thereby, examine the implications of political and economic changes in China for these people. Leading an interview taught me much, as I traveled to different households and tried to establish a trustworthy environment, ask questions in a way that would lead to informative answers, and yet create a pleasant atmosphere. The informal interviews were quite different. We approached people in pairs, hoping to establish a connection strong enough to yield a “story.” One day, I wrote down after such an interview, “Today, I fell in love with China.” The interviewing, both formal and informal, was a true learning lesson. People’s answers made me question some of my beliefs, and inquire more deeply into issues of modernization, cultural values, and preservation. And the people themselves, their homes, and their hospitality were mesmerizing. I began to create my own mosaic of China with my pieces from Shanghai. Now, I am at the East-West Center in Hawaii participating in the Asia Pacific Leadership Program. My experience in Shanghai proved crucial in learning more about China, its people, and my own direction in the future. I hope to go back as soon as possible, perhaps during the second half of APLP in pursuit of an internship.