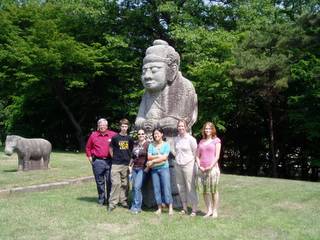 This trip was a nice surprise for me. Instead of being isolated in campus housing as I normally am in Korea, I lived with my students in a wonderful old neighborhood of Seoul City. Our accommodation was a traditional Korean mansion that had been converted into a guest house. As we explored “North Town” people quickly came to recognize us as residents of our guest house. I am proud of the way my students alternated between following me on organized excursions and taking off on their own, always returning safely because of the logic of the city’s public transportation system. By the time we left the country, they were fully able to manage on their own.

For me, the experience of living “close to the ground” with my students, walking all the time, taking mass transit, and seeing things through their eyes as they “discovered” Korea, reopened vistas and a way of savoring life in Korea as nothing else could have done. The next time I go to Seoul I will probably eschew the comforts of the campus guest house and go back to where we were in “North Town,” to experience again the authenticity of contemporary life in Korea. This trip gave me back something that I had lost.

I also had the tremendous personal pleasure of introducing the students to “My Korea;” that is, the Korean connections that I have, the institutions that I know, my favorite haunts, my “home” university of Yonsei, and my friends and even former students. All these people and institutions cooperated to help host us, to arrange our transportation, special admissions to things that aren’t normally accessible, home-stays for the students, and chances to repay by sharing our own lives with them.

No doubt the episode that highlighted the entire time in Korea was our participation in the 25th anniversary observance of the Kwangju Democracy Movement of May 1980. This event, which can be compared to the Tiananmen Square demonstrations of 1989, was a spontaneous popular protest against military rule by the Korean army that was crushed with great violence and loss of life. The deaths of the “democracy martyrs” are now commemorated in a solemn ritual each May. Our visit coincided with the 25th anniversary at the martyrs’ cemetery, an event where we were given VIP seating, sheltered from the rain under an awning while President Roh Moo Hyun gave the commemorative address.

We were invited to Kwangju because it is the sister city of San Antonio, where Trinity University is located. We arranged through the sister city committee to take greetings from our Mayor, and to serve as a friendship delegation. In this capacity we were met, hosted, given home-stays, and taken on tours of the area, as well as invited to participate in two commemorative symposia: one for students, where Sarah Hutt spoke, and one for faculty where I gave a prepared paper. In terms of our purpose, the Kwangju experience fell into the category of “civil commemoration,” or “civil religion,” a variant of our theme of religion in daily life.

Elsewhere on the itinerary I learned much about Buddhist art; I heard my first lecture by a Zen abbot; I made mental connections for the first time between Korean Buddhism and Shamanism; and I gained a little more knowledge of the history of Christianity by visiting Catholic sites I had never seen before. My students, four of whom are Chinese majors, pointed many things out to me based on comparisons with things they’d seen in China. In all these respects, the experience has made me a better teacher and has increased my mature understandings of East Asian society-understandings that will inform and enrich my writing as well.

Stephanie Hilz
The Revival of Buddhism in Postwar Korea

Buddhism at the start of the Choson dynasty was a very prominent and powerful religion in Korea, with Buddhist officials playing a major role in government politics at the time. As neo-Confucian scholars gained more influence however, leaders during the Choson were put under more and more pressure to eliminate the over-abundance of monks and temples in the country and to decrease the amount of control these Buddhist officials had in government affairs. Buddhism did not start to rebuild again in Korea until much later, when during the Japanese invasion in the 1590s, monks took a heroic stance in defense of their country and won the admiration and respect of the people and the government.

Today in postwar Korea, Buddhism is a thriving religion. Temples are located throughout the country, in major cities and remote areas, and attract a large number of both tourists and worshippers. While still holding true to many traditional values, Buddhism in Korea is pushing off into the modern age, with big city-wide celebrations, computer-generated banners over the entrances to temples, cartoon baby Buddha’s surfing the internet on their laptops, and even a Buddhist radio station and cable TV channel. Not only is Korean Buddhism attempting to withstand the growing influx of Western culture and a changing society, it is determined to move along with it.

Korea is a Confucian country, traditional in its values despite the trappings of modernization. Cell phones simply cement the traditional bonds of family and friends. The students we met were music fans and deep into computer culture, but their lives were being driven by loyalties, expectations and obligations from the people in their networks. Our “belonging” in our neighborhood created a place for us, even as paying guests in a lodging, and made it possible for people to “know” us. Our university’s ties with Yonsei and Ewha enabled us to call on busy people to host us and orient us and gave us a place to “fit.” Dr. Clark’s friendship with city officials in Kwangju enabled us to have the red-carpet experience of visiting Kwangju during the May 18 commemoration and sitting in the VIP section. In our homestays we observed the love and interaction between generations. At schools in Seoul and at university symposia in Kwangju we experienced the passion for learning that drives young people to excel and is so much a part of Korea’s national spirit.

Confucian scholarship was the theme of our visit to Yi T’oegye’s shrine, the Tosan Sowon, near Andong. In this mountain retreat we saw texts and breathed the atmosphere where T’oegye pondered the tension between the two elements of human consciousness, the emotions and the power of reason. We learned how King Sejong sponsored the literary arts and the development of a writing system that would one day make it possible for Korea to have a 99 percent literacy rate.

Researching the role of Daoism in Korean life posed a difficult challenge. It was interesting that in a country so rich in various religious traditions, and so deeply influenced by China, there was no established Daoist religion. However, on closer inspection it became clear that some vestiges of it could be found in Korean society.

The Buddhist traditions in Korea show the most influence from Daoism. The placement of the temples in Korea is often done by the principles of feng shui. The traditions and ideas of feng shui originate in ancient China and from them come some of the basic tenants of Daoist philosophy. To find it used in the placement of Buddhist temples came as a surprise to me and is something into which I will be inquiring further.

The decoration of the temples also shows Daoist influence. In China, the Buddhist temples are all very plain with little in the way of ornamentation and decoration, which are characteristic of the Daoist temples. Yet in Korea, such fancy ornamentation, including the use of the yin and yang symbol, is found at all Buddhist temples. This and other features stood out as differentiating Korean and Chinese Buddhism, and hinted at influence by Daoist ideas.

From my experiences in Korea, I found that much of the Daoist influence is not seen as being Daoist; instead it is thought of as being Chinese influence. My paper then will focus on these Chinese influences, so prominently found in the Buddhist traditions of Korea but also elsewhere in society, and how they have shaped Korean life and culture into what it is today. My goal is to determine to what extent these influences, by whatever name they may be called, reveal the influence of Daoism in Korea.

My research aspect was to examine the ways in which South Koreans participated in civic religion. Civil religion or civic religion refers to ritualized expressions of patriotism that function on a sociological level as religion. Korea’s blended history, recent flourishing into a more representative democracy and the overshadowing nature of the Korean War on the national psyche create a unique situation for study. During our time in Korea, we had fruitful opportunities at the May 24 Commemoration, the Seoul War Memorial and the Joint Security Area of the De-Militarized Zone between the two Koreas to observe and interpret the symbolism and ceremonial behaviors which suffused these experiences. Understanding the roles of civil religion in South Korea allows for more successful navigation through the complex issues of wholeness and division which remain ever current on the divided Korean peninsula.

Jennifer Yu
The Meaning of Christianity in Korean National Life

Korean Catholic Christianity got its start in the late 1700s and endured brutal persecution during its first century. Protestant Christianity traces its history to 1884. Both grew while undergoing severe tests during the period of Japanese colonialism, the Korean War, and sixty years of national division, during which Korean society has experienced revolutionary changes.

Our first encounter with Korean Christianity was at a Catholic martyrs’ site in Jeonju, in southwestern Korea. We explored Catholicism further at the museum on “Head-Chopping Hill” in Seoul, an execution ground for Catholics in the purge of 1866. Here were also markers for important phases of Catholic history, from the statue of Father Andrew Kim Tae-gon (d. 1845) to the bust of Pope John Paul II, who came to Korea for the Catholic bicentennial and canonized 103 Korean martyrs from the century of persecution. I also learned about Catholicism from Catholic relatives I visited in Korea.

Team members also visited Protestant sites, including the missionary community’s cemetery and the Museum of Christianity at Soongsil University. The team’s most striking encounter with Protestant Christianity without doubt was the service at the Yo’uido Full Gospel Church, a megachurch with 25,000 worshippers at a single service. Here we heard the pastor exhort the congregation to get ready to drive the demons out of North Korea, the assembly sang the Battle Hymn of the Republic in Korean, and we saw a video of the pastor, David Yonggi Cho, visiting New York and being honored as a kind of deity himself.

My paper will take these impressions and talk about the strong flavor of Westernization in Korean Protestantism and the more muted Korean-style practices of Korean Catholicism, but also the vitality and attractions of both strains of Christianity to the increasingly-prosperous Korean middle class.