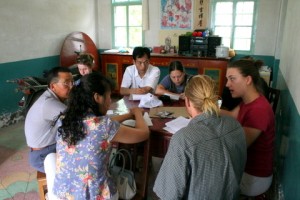 For four weeks, we (the faculty mentor and five students) collaboratively conducted ethnographic fieldwork in Jiangsu Province on how ancestor worship may be changing as China experiences massive and rapid economic and social change. We interviewed households in the countryside and city and supplemented these time-intensive interviews with anonymous questionnaires. Our research was indeed collaborative: we all took turns being the primary interviewer and writing up field-notes, we met frequently to discuss research strategies, and most members of the team gained experience with the digital recording equipment. We are now analyzing our notes and other data, but we can make some preliminary conclusions. Generally, ancestor worship is indeed changing in response to larger economic and social shifts in Chinese society. For instance, ritual worship is conducted in smaller groups as wage labor mobility increases and average household size decreases, and women’s roles in rituals honoring ancestors appear to be increasing. We also found that the traditions, memories and values that support ancestral worship are proving more durable in the countryside than in the city, although this difference was not as great as we had originally hypothesized.

We conducted formal, “sit-down” interviews with members of 11 different households, directly involving 23 interviewees. These longer, recorded interviews comprise the bulk of our data. We also designed and translated a questionnaire and collected approximately 80 of them from respondents. Of course, we also chatted with dozens of people informally about what we were doing, made informal observations in the city, countryside, and in people’s homes, and took photographs. In the end we achieved our goals: we interviewed more households than we had estimated in our proposal; generated a thorough collection of written notes upon which to base ongoing analysis; practiced and honed research skills by socializing and gaining rapport with potential informants; conducted informal and formal interviews; took jot notes while visiting households; successfully used our digital recording equipment; wrote up professional-level field notes afterward; and periodically assessed our goals, progress and strategies while in the field. 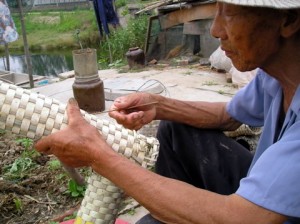 We began our work in Jiangsu almost as soon as we arrived. Our first duty was to secure transportation, then secure informants and translators. As it so happened the interpreters and informants worked out exceptionally. We began the adventurous step of dividing and riding out through the city in opposite directions, each sub-team taking one interpreter. Our goal was to literally introduce ourselves to people that we saw while out, eventually asking them if they might like to be our informants for the research. (Ultimately), our informants ranged from authors, to farmers, to eel fishermen. (We came to discover that) for many of the families we interviewedâ€¦(family and funeral related) traditions are practiced mostly by older generations, and are threatened by conflicting new sensibilities that have been introduced through globalization. The younger generations have moved from the ancestral home and do not return often. Once away, many of the old practices still performed by their grandparents and parents are lost to them and may never be regainedâ€¦If I have learned one thing through this experience it is that the work we have done in isolating and studying the uniqueness of their lives and culture has just as successfully revealed the similarities and parallels of their culture and lives to my own.

I was lucky enough to be part of a great team where everyone consistently had multiple roles and always fulfilled what was expected of them. We all, at some point, took on the positions of interviewer, note-taker, recorder, and observer-all of these skills are needed while doing fieldworkâ€¦In spite of our occasional challenges, we were, overall, very successful. We rode our bikes around during the day, meeting potential interviewees and gaining rapport, hoping to be asked back the following day or soon after. We gained all of our interviews that way, as well as the respect of some of the most interesting people I have ever met. Our surveys were another important way to gather data, and also inform the people of our research. The simplest (yet one of the most striking) ways of gathering information was mere observation. Most of the households we visited contained altars and jiapu (ancestral records), and quite a few even had traditional burial mounds on their properties! Throughout my trips to these households, I felt engulfed in Chinese culture, and loved it! That one month in China taught me more than I ever could have imagined-not only about China, but about myself.

This experience of traveling to China and conducting actual research has been one of the most valuable educational experiences of my life. I’ve always believed that the best education comes from real experience, and though classroom education is crucial in developing a strong base of knowledge for future pursuitsâ€¦nothing can take the place of experience. You can learn how to ride a bike from a book, but until you ride it, you will never truly know how it is doneâ€¦Throughout the month, our research carved out a solid conclusion from our hypothesis. Though ancestor worship has lost some of its importance in the minds of the younger generations, the practice itself is not vanishing the way we thought it would in the face of modernization and rapid development. It is true that ancient burial graves are being displaced and sometimes built over, but human beings are flexible creaturesâ€¦families will still burn paper money and prepare a feast for their deceased loved ones, and sometimes will gather dozens of relatives for the holidays. It (ancestor worship) might not be an integral part of every day life anymore, but it is a persistent part of their culture that doesn’t seem to be disappearing.

Alongside my team of peers and my professor/mentor, I spent four weeks doing ethnographic field work in a small city in Jiangsu, China. Our research focused on the topic of changing behaviors and beliefs regarding traditional ancestral worship … Our team worked collaboratively, using several different methods to gain insight and data about these changes. Conducting interviews accounted for the majority of fieldwork, along with administering surveys, taking field notes, and simply talking to local people… Though we have yet to fully analyze our notes and data, it is apparent to us all that the practices, behaviors, and beliefs regarding ancestor worship are indeed changing. It is evident that there are many factors behind these changes, including changes in gender roles, increased mobility, economic changes, and changes in family structure. The relationships between these factors and ancestor worship will become more and more apparent as our analysis continues.

This being my second time in Jiangsu Province, I did not feel the same type of culture shock, but it was rather surreal to be in the same city in which I had made connections and formed bonds. It was precisely because of these connections that we were able to gather such rich data is such a short period of time. Our friends in Yancheng helped us meet families to interview, provided us with insight about cultural norms and taboos, and also helped us to avoid many potentially embarrassing blunders along the way. The last thing that I would like to express in this summary of my experiences in Jiangsu Province is how important our group interaction was to our success. We worked as a team throughout the entire process. Everyone had strengths and weaknesses. Without the entire team’s ability to work together, our work would never have been a success.