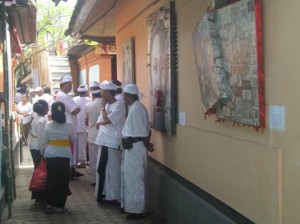 This collaborative research project, carried out from July through August 2006 by one faculty mentor and four student collaborators, addressed shifting discourses of “identity” and “culture” in Bali, Indonesia. Using anthropological methods of participant-observation supplemented by interviews, guest speakers and community discussions, project participants explored various facets of Balinese identity-formation, broadening their understandings of dynamic processes of cultural redefinition and globalization. Student research projects on the arts and identity, youth culture, feminist literature, and new articulations of regional autonomy complemented the faculty mentor’s ongoing research on community peace-building in the aftermath of conflict and the role of narratives of “Balinese culture” in setting the limits and possibilities for social transformation. By exploring the various ways in which Balinese identity is constructed, expressed and challenged, collaborators were able to gain a deeper understanding of “Balineseness” as a complex historical production, as well as to reflect upon the practice of anthropology and its methodological, political and ethical challenges. The students were also able to build bridges across the economic and political inequalities dividing Indonesia and the U.S., making plans to bring several of their Balinese peers to the U.S. this upcoming academic year.

As a scholar and teacher, I found the experience of mentoring student field research projects to be deeply rewarding. My students brought new perspectives to the place where I have worked for almost a decade, and their questions and observations often led me to rethink assumptions I had taken for granted. Our experiences will have a direct positive impact on my teaching as well, with my new understanding of what students find challenging and compelling offering me material for reworking my courses on field methods and the politics of culture and identity. Perhaps most beneficial to me as a faculty mentor, however, was the contagious effect of their enthusiasm for their work and their empathy for the Balinese they met. The students touched the lives of those who hosted them, as the hugs and tears and promises to return that marked our farewells attested, which not only strengthened my own networks in the community, but brought me a renewed appreciation of the promise of anthropology at fostering cross-cultural understanding and a new sense of potential future programs linking Indonesia to the U.S. 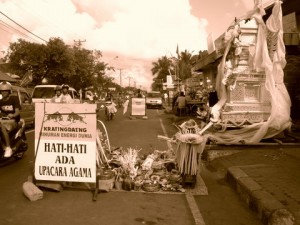 While we had known before departing for Bali that we wanted to frame our research, as much as possible, as a collaborative endeavor with local students and scholars, the students felt we needed to go even farther. Using our sluggish dial-up Internet connection in Bali, they researched opportunities for foreign students to study in the U.S., and they are now in the midst of a fundraising drive to bring one highly motivated Balinese recent university graduate to Temple University’s Intensive English Language Program this January, where he will gain the linguistic skills he needs to apply for U.S. graduate programs in anthropology. The students are also exploring possibilities for bringing four more young Indonesians from an innovative arts collective to tour the U.S. this spring, and have already secured funds from various departments at our college. Inspired in large part by my student’s incredible enthusiasm, I have also committed to working this year on a project to create a research and training program next summer in Indonesia that will teach Balinese students and human rights activists basic research skills that will better prepare them to become empowered ethnographers of their own society.

Amidst a ceremony in the family compound that was the site of my homestay, I struggled to reconfigure my research project as events and debates unfolded. An exhibition of the culture-critiquing art of I Gusti Putu Hardana Putra, known as “Wiss,” that was organized and installed in the family compound by his friends, became the focus of much of my project. My observations of the exhibition, its reception in the compound, and the ensuing discussions about it provided source material for my attempts to better understand visual arts, student collectives, identity and disjuncture. These research experiences reaffirmed my desires to continue conducting anthropological fieldwork in Indonesia and to pursue a Ph.D. in Cultural Anthropology. 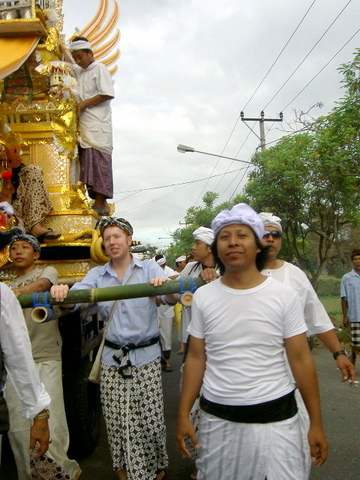 My research focused on understanding how Balinese identity has been shaped by the new discourses on “regional autonomy” from the central Indonesian state that emerged after former President Suharto’s 32-year rule ended in 1998. By speaking with Balinese community leaders and students, as well as Muslim migrants, and following local debates over culture, tradition and identity, I was able to gain a deeper understanding of the micropolitics of post-conflict society. My experience gave me a much more nuanced appreciation of both the challenges and benefits of ethnographic research as a means of comprehending political processes.

I came to Bali with a plan to research Balinese youth identities and expressions of linguistic nationalism through punk rock music. However, as our time in Bali progressed, I realized that without understanding the social, political and cultural context in which this phenomenon is set, I could not begin to understand it at all. Thus, what began as something quite focused broadened to include researching political movements for regional autonomy from the centralized Indonesian state; legacies and memories of the anti-communist violence of 1965; the newly popular ajeg Bali or “strengthened Bali” discourse on Balinese identity and cultural self-confidence; the Indonesian higher education system; relationships between youth and their communities; and kinship and familial structures and relations. In the course of my research, I also began to re-evaluate anthropology and my personal connections to and relationship with the field.

During my time in Bali I focused on studying the lives of women, by interviewing women from various backgrounds and reading translations of well-known Balinese writers. Through my research I discovered the complexities of Balinese women’s identities: their obligations to their families, their educational and career goals, as well as their reactions to current religious trends. I explored the works of Balinese writers, including Putu Oka Sukanta, Oka Rusmini, Mas ruscita Dewi, and Cok Sawitri, and carried out participant-observation research on women’s daily activities, debates, and social trends. By comparing my own observations to what I learned through my literary research, I was able to gain a much deeper understanding of shifting identity politics in Bali, as well as of research methods and their political implications.