China: The Metropolis as Icon of Modernity 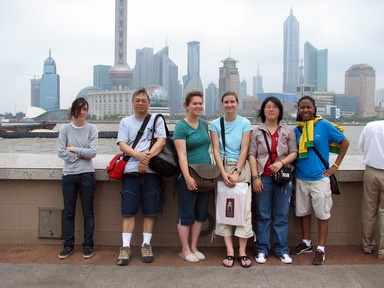 The summer research in China turned out to be a challenging experience. Fieldwork has a way to muddle up whatever conceptual construction that had seemed so perfect in the beginning. By walking the city streets, talking with people, eating at local restaurants, that is, by becoming a part of city life ourselves, we were exposed to the nuances and subtleties, ambivalence and ambiguities of China’s urban life in transition. What these “field discoveries” meant was that the students had to process and re-process old and new information and adjust and revise their theses almost on a daily basis. To facilitate this, we held long discussion meetings once every three or four days to work through the issues as a group. I personally find these meetings exciting and productive. I have come to believe that this format of having diverse individual projects under a collective theme can serve as a model of small group teaching and student research that should be particularly congenial to a small college environment like Mills. I plan to explore the possibility of a new course in Asian Studies, perhaps a research seminar, that takes my experience as faculty-mentor as a model of operation. 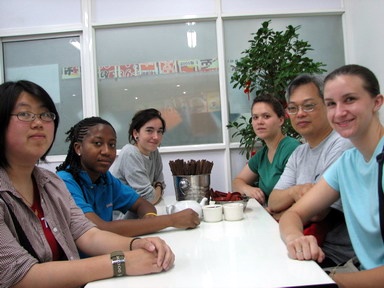 As the faculty mentor of the Mills College group, the summer research I undertook with the five student fellows to the coastal cities of China was a rich, memorable, and fulfilling experience. While our group developed a collective theme that looks at the metropolis as icon of modernity, individually all five members of the Mills College group pursued individual research projects that took them in five different directions: the iconography of war memory, architecture as a site of contention between modernity and tradition, art and artists in a globalizing environment, advertisement and marketing as competing indexes of state ideology and the new market economy, and the cross-culturalization in theatrical art.

On a more personal note, the research trip this past summer was also a rewarding learning experience. The rapidity of China’s development has been widely known, but actually witnessing China’s modernizing process in person literally gave me a jolt of astonishment. The spectacle of the modernizing craze is evident everywhere and bewildering. Yet, it somehow also bespeaks what seems like a totalizing campaign of reckless abandonment that is reminiscent of some mass movements in the past, and I wonder if what we see now is not a contemporary version of the Great Leap. There is no doubt that in China’s modern cities the people’s living standard has been raised to a level that was unimaginable only two decades ago. Yet, I also see the inexorable emergence of two China’s, not between city and countryside-though that certainly is true-but within the perimeters of the metropolis itself. At the same time as China’s urban affluent are no longer fazed by the stigma of conspicuous consumption, there is a vast population of city dwellers who are just getting by, resorting to unusual strategies (e.g., stacking up in a small apartment with multiple inhabitants) to eke out a living of subsistence.

Stacy Fisher
Huaju and Broadway: A Comparative Study of Chinese and American Theatres 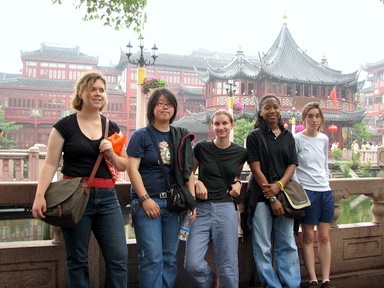 It wasn’t until I arrived in Shanghai that I fully understood that I was in China. Never had I seen such huge blocks of apartment buildings, balconies all billowing with the day’s wash. Never had I seen such manicured shrubberies separating the directions of the freeway, wavy greens in the midst of traffic. As far as my research is concerned, I was able to see three terrific Huaju (spoken dramas) that will be incredibly helpful in completing a research paper. One of the Huaju was a drama about class-struggle (a more classic theme for Huaju), another was a very modern love story with a minimalist stage, and the third was a fantasy piece, complete with ghosts and possessions, all taking place within a film studio. I was able to see first-hand that Huaju is an amazing mix of classical Chinese theatre and Western theatrical influence.

Stephanie McLeod
Advertising in the Socialist Market Economy of China 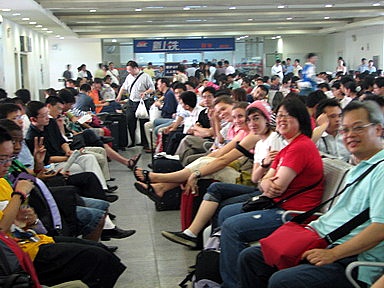 Traveling to China was an experience that will remain forever in my mind. As my group and I journeyed from one eastern city to the next, I realized that these physical experiences were far more exhilarating and informative than comprehending intangible ideas written in a textbook. By the end of the trip, I was able to review the knowledge I acquired through site visits, lectures, and personal contacts to obtain a better understanding of present day China. The most valuable information that I collected with respect to my research projects concerns (recent) developments within China’s advertising industry, the Chinese government’s separation of politics from market policies, and the government’s use of public service announcements. I believe (an understanding of) all of these areas is critical to understanding whether advertising is a tool that the Communist government uses to resolve the contradictions within a socialist market economy.

From roughly 1932 onwards, imperial Japan staged a series of often-brutal assaults upon the Chinese mainland, under the dual pretense of territorial ambition and East Asian “liberation.” This particular chapter in the history of China and Japan continues to have a lasting impact more than seventy years later, as is evident in current museums, public memorials, and other related spaces dedicated to national memory in China. However, as is the case in all histories, the past is often viewed with the biases and prejudices of the present, whether intentional or otherwise. My research attempts to understand the agendas at work in creating Chinese war memorials, focusing upon the factors at play in commemorating the victory over the Japanese invaders, and also how nationalistic sentiments have colored the way these exhibits are mounted. By analyzing photographs at the exhibits and also comparing the English, Japanese and Chinese commentary at these sites it is possible to demonstrate how they are shaped by nationalistic sentiment and therefore continue to shape current Chinese historical perceptions.

Our group’s trip to China was very fruitful in helping me further my research on the state of architecture in China in which I seek to show that the “anxiety for modernity” in China, or the overarching desire that Chinese have to occupy a preeminent position in the modern world affects contemporary architecture. This “anxiety for modernity” is reflected both in the tremendous amount of development occurring in coastal cities and in the tensions surrounding decisions about whether to destroy or to preserve historic architecture.

I am excited about the possible future applications of this experience in China. I am going to be a high school history teacher, and I know first hand that there is an incredible lack of knowledge about and emphasis upon Asia in secondary school curriculums. I will use firsthand accounts of my experiences in China in my teaching which will enhance my ability to inspire students to develop their own interest in Asia.

Sarah Wong
The Chinese Contemporary Art Scene: Trends of the Modern Avant-Garde and Their Growing Influence

The three weeks we spent in China have opened my mind to a world of possibilities that I would never have previously conceived. In pursuit of my research I met with several artists, professors, students, and other members of the larger art community. Our talks focused upon comparisons between Chinese and Western art and upon the purpose of artists within their societies. One Beijing University student noted that while Chinese art is increasingly important in the Western art world and has made Chinese artists popular outside of China, it is the market within China that is most important. It was also noted that Chinese art, whether produced in China or elsewhere, is still Chinese art.