Cultural Festivals, Tourism and the Politics of Representation in Island Southeast Asia 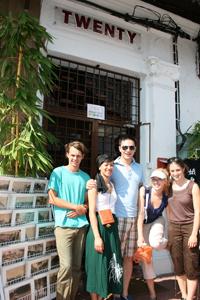 Professor Mercedes Dujunco led a group of five Bard College students to island Southeast Asia to conduct ethnographic research on various individually chosen topics related to tourism and cultural festivals in Malaysia and the Philippines. In the Philippines, they participated in the Libon Paroy Festival in Libon, Albay; the Sinulog Festival in Tanjay, Negros Oriental; the Pakapya-Agtike Festival in Socorro, Mindoro Oriental; and the Abayan Festival in Butuan City, Agusan del Norte. In Malaysia, they attended the Festa de San Pedro in the Portuguese Settlement in Malacca; the Borneo Cultural Festival in Sibu, Sarawak; the Nunuk Ragang Ceremony/Festival of the Kadazan people in Ranau, Sabah; and finally, the Sarawak Rainforest World Music Festival in Kuching, Sarawak. Members of the group explored various components of the festivals and how these contributed to certain portrayals of Southeast Asian women, to the affirmation of local/regional identities vis-a-vis the nation, to the spectacularization of once sacred rituals, to the constructed realities of particular tourist destinations, and to the ideology of conservationism. They all came away with a better understanding of the politics of representation operating in these festivals set against the backdrop of the contrasting tourism efforts and social, historical and religious contexts in each of the two countries.

The original focus of my study was the employment of women at cultural festivals and their interaction with foreign tourists. While in the field, it was difficult to find women to interview at the festivals we attended because there were few foreign tourists present. Many of the festivals we attended were “opening up” for a first time. However, while moving through tourist facilities — hotels, hotel lounges, spas, and so on — in Malaysia, it was clear that most employees were female and consistently Filipina. As a result, my research shifted to exploring the experiences of Southeast Asian women working in different aspects of the tourist business — from the full-time musicians and dancers we met at the Borneo Cultural Festival to the overseas working Filipinas who played music and sang at the lounge in hotel lobbies. This unexpected change makes my research much more personal for me, as my focus changed to speaking with other Filipino women who had been forced to leave the Philippines to find decent work.

While traveling through Malaysia and the Philippines we interacted with people from both remote and urban locations whose lives already are, or are about to be, substantially affected by the tourist industry. Our group gained insight into the early commercialization which communities undergo as they begin their transition into a tourist-based economy as part of their national government’s long-term goals. Our experiences in the field led me to realize just how complicated the conversation about globalization is and to reflect on whose livelihood is truly at stake when we hear politicians, economists, social scientists, and business people discuss “progress” and “development”.

My original topic of study involved investigating the relationship between religion and dance, specifically ritual dances as they are performed for tourists in festival settings. However, I plan on revising my topic for my final report because few of the cultural dances performed at festivals were religious or ritualistic in origin. Instead, I will investigate the relationships between culture, religion, school, and family as they are affected by globalization and tourism. Increasingly, dances seem to be reinvented in order to be attractive to tourists unfamiliar with Malaysian and Philippine culture. Moreover, education in folk dancing is more dependent on schools as they are passed down less and less through family and practiced less in rituals. I am interested in why traditional dances are valued and preserved and how this is increasingly impacted by globalization.

I learned a lot about ethnography and about myself from my trip to Malaysia and the Philippines. Highlights include interviews with members of the Portuguese settlement in Malacca about their Portuguese identity, an excursion with a Malaysian dance teacher to an Iban longhouse in Sarawak, and an interview with the high priest of the Kadazan tribe in Sabah about his monotheistic religion that also incorporates elements of animism. In many ways, I have never felt more intellectually and emotionally engaged as I did during these interviews. Witnessing small-scale societies put my own society into perspective for me. I also have developed a deep interest in the relationship between localism and nationalism, and a deep interest in what role religion plays in a culture. I have also come to examine more keenly what is missing in my own life such as a sense of family, community, local and national identity, and religious or spiritual identity.

The topics addressed in my proposal originally focused on the ideologies of animism and conservationism and how they relate to tourism and music festivals. However, my research did not reveal to a high degree the practice of animism. My original intention was to find a link between music and the environment through acoustic ecology, but I found that looking for this link was quite unnecessary, as the festivals provided the links between music and the environment in interesting and unique ways.

During this research experience, I came to think that all learning is ethnographic, archaeological, and/or interpretive. The experience helped me realize that my typical method of learning is to negotiate and communicate. Doing fieldwork in a developing nation like Malaysia offers someone like me, who is interested in thinking critically about eco-tourism, the opportuity to consider not only the advantages and/or pitfalls of eco-tourism, but also the ability to learn through personal experience what it is to live in these sites.

In my proposal, my research agenda was inspired by the critical analysis of nationalism and performance developed by Kelly Askew in her ethnography, Performing a Nation, in which she suggests that a nation does not form simply through the performance orchestrated by the governing state, but rather is conceived through the performance of everyone who lays claim to the nation, including groups that undermine the state.s agenda. My intention was to look at state-organized and state-sponsored festivals through this theoretical lens, thinking that these festivals would reveal the politics of representation as the government selected the music and dance of some ethnic groups as representative while neglecting that of other ethnic groups. As it turned out, many of the festivals we attended were locally organized and locally attended so the central government’s role in them was minimal. However, Askew’s theory still applied because one can still discern the sense of nation in these productions and the struggle of local people’s to showcase their identity as they make themselves known to outsiders, and bring acclaim for themselves and their nation.

Our crash course in conducting field research in Malaysia and the Philippines left me with a new appreciation for anthropological fieldwork. Traveling frequently, conducting interviews with as many informants as possible, and attempting to take in all that we could in such a short time revealed how difficult field work can be. While we did not have time to establish rapport and live among our informants, we collected information that is key to future research. This spadework opened me up to new insights concerning anthropological theory and practice.

My research focused on tourist advertising and the Asian tourist experience. There is a wealth of sources for investigating the former including commercials, websites, videos, and signage. I also considered the imagery and words used to describe various places and how the actual tourist experience at these places affects advertising. In addition, I sought to see how the presence of tourists affected the regions and festivals that we visited. I discovered that the tourism campaign in Malaysia is much more rigorous and developed , particularly this year as Malaysia celebrates its 50th anniversary of nationhood, than in the Philippines. There does not seem to be any big push to promote tourism in the Philippines such as there was during the Marcos era. I discovered that tourists gain little sense of the reality of a place and that festivals lead tourists to feel they are experiencing the culture of a given location but in reality they are really seeing staged performances that have little to do with reality. Tourism and festivals have a dynamic and dialectical relationship, and advertising is at the forefront of this relationship.

People say that nothing compares to first-hand experience, but I did not realize the depth of this statement until I went to Malaysia and the Philippines. In doing my research, I learned how to ask questions and to effectively interpret the answers given to me.