Buddhism in the Modern World:
The Quest for Social and Religious Identity in Southwest China 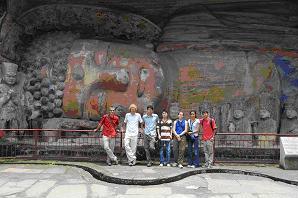 Funded by the ASIANetwork Freeman Student-Faculty Fellows Program, six members of Gettysburg College traveled to Buddhist sites in Southwest China from June 6 to July 4, 2007 to explore the state of Buddhism in modern Southwest China. With the kind help of our friends and colleagues in China, we visited many different kinds of Buddhist sites: urban temples in downtown Chongqing, ancient Buddhist cave grottoes in Dazu, the giant Buddha at Leshan near Chengdu, the Tibetan temples and markets of Chengdu, the peak of Mount Omei in Sichuan province, and many more besides. We met dozens of Chinese students and visited people from all walks of life. And after spending several days in remote Southern Sichuan province visiting the people of the Yi culture, we were able to contrast their nonbuddhist shamanic traditions with the Buddhist traditions of the Chinese Han people. Entering and leaving China we passed through Beijing, where we also had the opportunity to contrast the cultural and economic conditions of Buddhist sites in Southwest China with those of the metropolitan capital. We found that modern-day Buddhism is largely used to support a thriving tourist industry. The motivations of this .tourist laity,. if it can be called that, are a combination of commercial, recreational, and spiritual factors.

My research topic focused on how traditional Chinese medicine (TCM) has been integrated into modern society, and how Buddhism plays a role in this. I found that in the past, Buddhist monks doubled as doctors, but this is not the case today. Throughout the trip, I interviewed various groups of people about the different kinds of medicine (traditional, modern, spiritual, and so on) they use today. I visited traditional pharmacies, watched people practicing therapeutic exercises in parks, and visited many shrines to the Healing Buddha, which are often found in Buddhist temples and are still actively used. However, most people I interviewed use nonbuddhist methods of healing. Whereas TCM still plays a significant role in rural and older populations, the younger generation uses it only as a backup to Western medicine. I believe that whether or not traditional Chinese medicine-much less Buddhist methods of healing-survives the twenty-first century depends upon the ability of practitioners and researchers to prove its worth to the younger generation.

Prior to our arrival in China, I had expected to find numerous examples of social engagement among Buddhist monks, monasteries, and charitable organizations. However, our travels revealed that active social engagement was not incorporated into life at a monastery. There were some select examples of social engagement that occurred at the local level of a monastery or among small groups of monks when individuals sought assistance. However, the majority of social action was orchestrated by the government. I was fortunate to observe a government run charity organization and interview both doctors and residents. Due to these discoveries, the focus of my research has shifted to analyzing the increasing control of the Chinese government over charitable organizations during the Cultural Revolution and how Buddhists are attempting to find their place in modern China. I am also investigating how the Chinese Buddhist model of social engagement compares with that of other regions in Asia, particularly Taiwan and Tibet.

A Buddhist scholar we met on this trip told us, quite frankly, that he believed Buddhism was dead in China. While traveling in China, even when we managed to find a temple where there were practicing monks, we were often told that these monks are mostly for show. These monks were paid to impress tourists, both Chinese and foreign. We also heard rumors that monks often have families, which shows the weakening of the traditions of monks. Students told us that their grandparents had been very religious, their parents semi-religious, and they themselves were not religious at all. It was suggested that the decline of Buddhism in China can be attributed to the change in social ideals concerning the family and to the sense that Chinese society used to be based on the family, but now it is based on the state.

Our travels in China took us to many ancient Buddhist monasteries-pieces of China.s past frozen in a modern day society. At first glance, there is an incredible historical depth enclosed within the multiple layers of monastic buildings. However, modernization and materialism has dramatically affected the daily life of Buddhist monks, whose decline parallels the decline of Buddhism all over China. A once grand religion is now a tourist attraction and purveyor of superstitious beliefs. Monks receive good salaries, sell expensive goods at temple shops, wear gold watches, and will tell your fortune. Should you get a bad fortune, for a certain fee monks can make it disappear. Some monks are actually “tourist monks,” men hired to wander the temple and answer questions from tourists, acting as if they are actual monks. 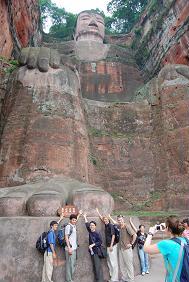