Urban Planning in the Early Years of the People’s Republic of China:
The Challenges of Education, Health Care, Housing, Sanitation and Pollution Abatement 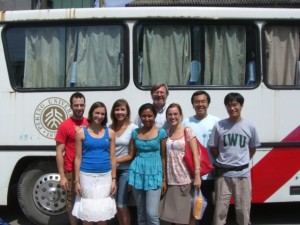 In the wake of Japanese occupation and three years of civil war, urban conditions presented China’s new People’s Government in 1949 with massive challenges: high levels of illiteracy, inadequate health care facilities, poor housing for many, outdated and unattended sanitation structures, and districts dirtied by high levels of pollution. Much has been written about the rapid changes in these spheres during the early 1950s, but little is recorded in English-language literature on the subject providing precise statistics and detailed information on the measures that led so quickly to the amelioration of these urban problems. Focusing on Beijing, Shanghai, and Hangzhou, our research team gathered data from libraries and municipal archives, visited museums of city planning, carried out interviews with former directors of city planning, and met with academicians and elderly city residents to gather statistical data on the changes in these key spheres, and to record the varied methods employed by officials and residents in these three cities to address these pressing problems. 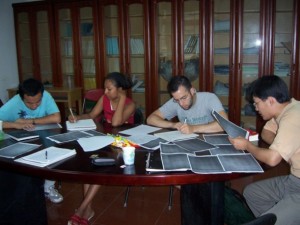 Although the Chinese Communists in 1949 had very little knowledge of pollution control strategies and environmental science and although they emphasized the acceleration of the development of heavy industry, they still took efforts to improve the daily lives of urban citizens by cleaning up the war-torn cities and rebuilding in a way that gave them basic necessities that the residents had never known before. After studying urban planning strategies in post-liberation Beijing, Shanghai, and Hangzhou, I have found that the Communists in China helped improve the living conditions of these urban residents by controlling the placement of industry, introducing green spaces into city plans, and cleaning polluted water sources and managing wastewater.

Receiving the Freeman grant not only has had a large impact on my capacity for research, it has helped change the way I look at the world by allowing me to thoroughly experience the kindness and generosity embedded in Chinese culture. In terms of career goals, the sophisticated research techniques involved in this grant has given me more confidence in my research skills, leading me to consider a career in an academic field. Overall, this grant has given me a new level of cultural and scholarly understanding that I never could have reached without the generous assistance of the ASIANetwork.

From 1949-1956 China developed unique and efficacious plans to create an education system in its cities. The three cities of Beijing, Shanghai, and Hangzhou had similar, yet varied problems that required similar, yet varied solutions. The need to preserve Beijing.s heritage and its stature as the national capital, the need to maintain the economic dynamism of imperialist-dominated Shanghai, and the need to develop Hangzhou into a modern city without the benefit of central government monies were just some of the problems faced by planners. It was through tireless work and good planning that the people of these cities were able to create an expanded education system that taught a vastly increased number of students.

Conducting research in a foreign country will have its vicissitudes. Tight schedules, large projects, rampant curiosity, and (some) culture shock are the ingredients for either great successes or great failures. But overall, it would be a fair characterization of the time in China to call it a great success. The team’s work provided all of us with an opportunity to push our comfort levels and expand our knowledge of Chinese history and our understanding of how to perform research abroad.

In the early twentieth century, constant political turmoil and military destruction severely worsened housing conditions in China.s cities, including Beijing, Shanghai and Hangzhou. However, in each of these three cities immediate action was taken after liberation to improve the living conditions of working class people through city planning and housing initiatives, whether it was cleaning up slums, repairing dangerous housing, or constructing new worker.s dormitories. In Beijing, between 1949-1952 along 1.57 million square meters of new housing was built, along with 1.37 million square meters of factories, colleges and universities, hotels, hospitals, and other industrial or public service buildings. In Shanghai, the economic hub of the China, the local government built New Villages to house workers, such as Cao Yang New Village, built in 1950 and inhabited by forty-eight families by 1952. The government of Hangzhou, although limited by economic resources, implemented a local policy of “basic improvements for dangerous housing and minor-scale renovation and construction (xiao da xiao jian).” My research focuses on these and other efforts undertaken by the People.s Government to improve housing conditions in Beijing, Shanghai, and Hangzhou in the period directly after the establishment of the People.s Republic of China (1949-1956).

Conducting research in China over the last summer as a recipient of an ASIANetwork Freeman grant has been an invaluable opportunity. As a student and a social scientist, I was able to learn firsthand about conducting research; I also reached a better understanding of what it means to do research in a foreign country and the setbacks, challenges, and rewards one encounters along the way. I also benefited in that I was able to increase my knowledge of Chinese culture, customs and language. I found that cross-cultural communication is the key to doing research abroad. I truly enjoyed my time spent talking to people, investigating primary sources, and taking photos of sites in order to illuminate our topic. From this project, I will take away not only the knowledge I have gained through the research itself, but an enhanced world view and increased sense of clarity about my own personal and professional development.

Our area of research has not been fully explored by American historians. Within a month of travel to three cities in China-Beijing, Shanghai, and Hangzhou-our goals of uncovering the urban planning efforts of local governments and city residents during the transition to the People.s Republic of China in 1949 and after were realized. By looking at primary and secondary sources, we were able to answer our many questions and look even further to uncover information about our topics. The sanitation situation in particular is one that the government gave much thought to, followed by action.

This research project presented a chance to learn at a more engaging level than ever before. Face-to-face interviews with important officials, in-depth archival research, and utilization of university resources-all these equipped our group with the tools to have a successful research adventure overseas. Personally, the trip presented an opportunity to improve my research skills, which included finding materials and sources, being able to process the information and deem what was the most valuable and appropriate for my individual topic, and coming up with the best questions for interviews that would generate the most concrete and useful answers. In addition to all of the research experiences and growing as a student, I know this experience also helped me grow as a person.

Since the Chinese Communist Party assumed power in 1949, it has experimented with a number of techniques for governing and providing services to the cities. It is not surprising that advances in health and other human services were specifically chosen by the Chinese government to dramatically illustrate the effectiveness of the new regime. The movement towards ensuring access to health care gained momentum with the Communist mass movements and goal of self-help between 1949-1959. China saw her “Ten Great years” in terms of advancement in the provision of health services. The nation made miraculous improvements in the first five years and was no longer seen as the “sick man of Asia.” Most of the health measures carried out during this period were led by the Sanitation Bureau, until the Health Bureau was set up in Beijing, Shanghai and Hangzhou. The efforts of the 1950s and early 1960s were in large measure based on models from other countries, particularly the Soviet Union, which provided a large amount of technical assistance. People in the community were mobilized to perform health-related tasks themselves. A large-scale attack was made on illiteracy and superstition. Large investments in resources were made to alleviate diseases, and mitigate against the adverse effects left behind by war.

I am extremely grateful for the opportunity to conduct first hand research in China on the topic of public health through the lens of urban planning, particularly since I hope to be involved in development efforts in my own country of Nepal. The research reinforced my belief that integrated planning, giving priority to health and sanitation, really does form the building blocks for urban development. Beyond learning from the academic process and experiencing how demanding archival research can be, I came back from our trip with a greater appreciation for the Chinese way of life. 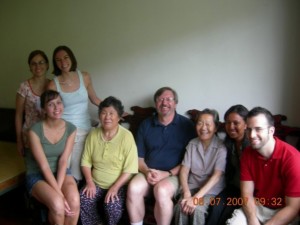