China and the West:
An Investigation of Chinese Cultural Encounters in the New Context of Globalization 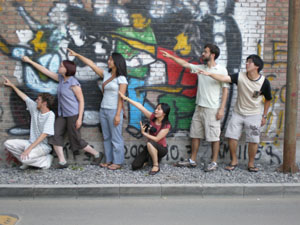 Our research goal was to examine various aspects of cultural encounters between China and the West in the era of globalization, i.e. the usage of English loanwords by Chinese youth, the influence of globalization on the life and perspective of migrant workers, avant-garde art galleries in relation to the global art market, the conceptions of traditional Chinese medicine vis-a-vis Western medicine held by the younger generation, and the making of queer films. In the beginning, the mentor was not fully confident that the research goals could be met because the projects were diverse and dealt with many issues. Although specific difficulties were encountered, the field research was a great success. Notable achievements occurred in interviewing and data collection, and the four week long research in Beijing turned out to be intensive and allow for multi-directional cultural encounters. Student researchers were able to observe not only how Chinese people receive Western culture and ideas, but they were able to personally absorb cultural shock. The experience proved transforming for them in their own self-perception and in the shaping of their views of the world.

Elizabeth Bogel-Allbritten
“Taking the basi to the kafei ba: Usage and Perception of English Loan Words in Chinese Youth Culture”

During my four-week stay in Beijing, I interviewed over 75 university students to investigate their use of English-derived loanwords, such as katong (cartoon), boke (blog), and kafei (coffee). I took into account social contexts in which these words are preferred or avoided, sources of the words, and students. feelings toward these words in light of globalization. I found that loanwords are considered fashionable and even when students prefer Chinese equivalents (e.e., dongua instead of cartoon), they use more loan words if those around them do so. Loanwords are not used with adults or in rural hometowns: students said that their parents considered loanwords too .casual. or, more often, did not understand the words. meaning. I have seen that loanword use is a socially dependent phenomenon: not only does loanword use fluctuate with environment, but person-to-person communication does much to spread loanwords, especially between cities and villages when students return home. New sources of media, such as the Internet and advertisements, are also highly influential. But while loanwords are not displacing a large number of traditional Chinese words, there is a trend towards loanwords becoming integrated into the Chinese language. In other words, students did not identify older loanwords, such as kafer or shafa (sofa) as true loanwords.

My time in Beijing was an unforgettable experience: not only did I move beyond the role of tourist and make friendships with several students whom I interviewed, but I became much more confident in my Chinese language skills. While in China, I was able to visit many parts of the city — not only cultural sites but also residential areas and schools — that opened up the opportunity for entirely new cultural experiences. I learned much about how to work with a translator, which presented challenges and rewards that I had not foreseen before coming to China. In the future, I intend to continue training and education in field linguistics, particularly in the area of language shift and language revitalization. Knowledge of how to interview people about language attitudes and use will be a vital skill to this career goal, one that cannot be learned in a library or classroom. 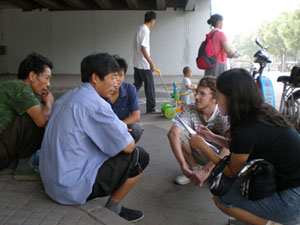 Arthur Chyan
“The Transforming View of Medicine in Beijing”

My project focuses on how young people in China perceive and use traditional Chinese medicine. Starting from scratch on a research project was difficult, but through the help of my faculty advisor, and my group mates, I managed to develop a research project I can complete. I have collected a good amount of data, and although this project has been difficult and filled with moments of frustration, I have worked my best. Conducting research in Beijing had a number of unexpected positive aspects. I learned to navigate through a very busy city, and work within an environment where so many others were focused on the rush of urban life. The research has led me to want to work with others directly as a medical practitioner, and to develop more generalized interests in all kinds of traditional medicines. 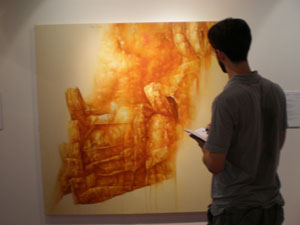 Over the course of our stay in Beijing, it was my goal to conduct research on Beijing.s art students and young contemporary artists. It was my intent to use a set of questions to uncover artist.s views on .inspiration, aspiration, and globalization. to enable me to discover how contemporary Chinese artists view the cultural and artistic exchanges increasingly occurring in the light of globalization. I also wished to consider how popularity in an international market might directly or indirectly affect an artist and his/her work. I was able to find, interview, and even become friends with a number of China’s contemporary artists, and ultimately interviewed twelve individuals yielding over twenty hours of tape. I also spent considerable time traveling to several of Beijing.s largest art museums. I was able to meet a Chinese gallery owner, who along with giving me an interview, also introduced me to a number of emerging artists.

In many ways, my time in China has solidified my future plans, because conversing with artists directly has confirmed my plans to continue to study contemporary Chinese art and artists at a post-graduate level. The experience also enabled me to establish a valuable network of connections that I may draw from in the future. 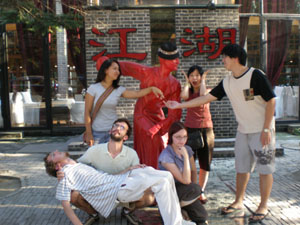 Christopher Green
“The Waitress and the World: The Meaning of Globalization to the Chinese Mingong”

Interest in Chinese migrant workers has risen as China becomes more of a world power, and yet few have studied the connection that migrant workers themselves have with the broader world. One might ask, how much are migrant workers lives and opinions influenced by exposure to foreign ideas? What are the views of Chinese workers about globalization? I addressed such issues by administering 150 surveys and 10 in-depth interviews. I discovered that these workers are quite tolerant of their current living conditions given the impoverished countryside from which they have come, yet they are eager to find better jobs to improve their standard of living. Many also link their progress and that of China to increasing globalization, although globalization itself is a term that they often have trouble clearly defining.

This trip gave me a better grasp of research procedures, cross-cultural issues, and the challenge of negotiating one’s way through a range of obstacles. I grew in my appreciation of Chinese culture, and in the recognition of my own weaknesses and biases. The valuable lessons learned through applying research skills and through this research experience will be applicable in my field in the social sciences and also in my interaction with people in general.

Karma Lama
“The Changing Face of Homosexuality in Chinese Cinema”

Through a series of interviews conducted with a range of individuals, I was able to gain a sense of current views in China about homosexuality, and more particularly, the views of those I interviewed on how film has played a role in shaping current views about homosexuality. Chinese filmmakers who produce/direct films about homosexuality seem to be focusing more on multiculturalism and seeking a foothold in the global arena of international queer films. Increasingly, their films focus not just on the theme of “coming out,” but also express a concern that the rights of homosexuals be heard and respected. Connections with the international film community are important to the development of queer films in China. Chinese who recognize that the topic of homosexuality is no longer an issue or seen as abnormal in China, attribute this not so much to China’s queer films, but rather to Japanese queer-themed manga (graphic novels) and Western television shows.