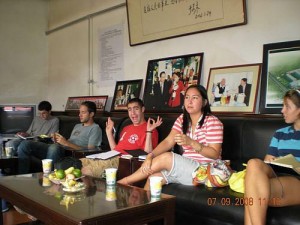 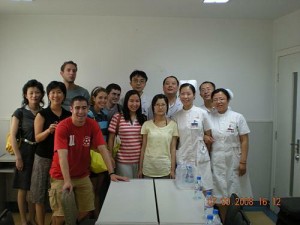 The objective of our research team was to document and contextualize the radical changes in contemporary Chinese society that have profoundly redefined the experience of being a Chinese person in recent decades. Each team member applied his/her specialty training to study one of the six important aspects of these changes: 1) Chinese people’s changed perceptions about political representation; 2) economic development and changed consumer behavior; 3) the practice of Western and traditional Chinese medicine; 4) the changes in religious belief and spiritual life; 5) the environmental consequences of economic development; and 6) the transformed consumption of cultural products. During the three weeks’ intensive research trip, we travelled through Beijing, Shanxi Province, and the city of Chengdu. We toured and had conferences at government offices, banks, factories and plants (candy factory, coal gasification plant, and vinegar factory) hospitals, non-government organizations, religious temples and grottos, trash processing centers, and universities. Each student fellow interviewed 70 to 100 people of different ages, professions, and gender throughout these regions of China. Student fellows successfully met the challenge created by culture shock, working with tight schedules, and collecting and recording data despite language barriers. The experience has prepared the students to conduct more advanced research in their respective fields and helped shape their future plans while, at the same time, transforming their perceptions of themselves. 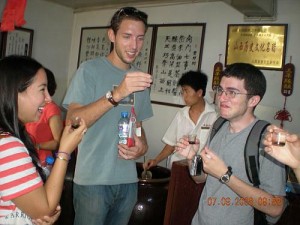 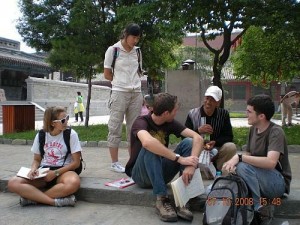 As a student-faculty fellow, my objective was to analyze how the government is adapting to a new market economy, what policies are being created to accommodate such development, and how this affects the Chinese people. I conducted my research by interviewing people from all levels of society, from monks and peasants to CEO’s, government officials, and academics. I consistently found that the government is seeking a fine balance between public and private investment, which allows market mechanisms to seek efficiency and higher profits, while still maintaining government control over vital industries. Chinese citizens largely feel that the new economy, while it is less stable, and has led to the decline of socialist-style government assistance in housing, employment, education and other areas, is leading to a general rise in salaries and more social freedom and flexibility.

Amanda Harris – “China in Transition: The Developing Economy and Its Effects on Consumer Behavior” 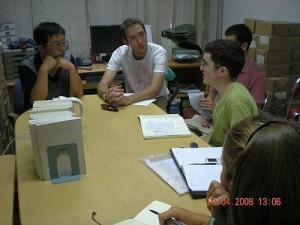 China is moving forward at an unprecedented speed and the cost was made more apparent to me as I was able to see and experience this. After interviewing approximately 100 different people from all over the country, with different views, backgrounds and lives, it is apparent to me that the country is trying to grow in a harmonious manner while still promoting individualism. China’s new economic policy has opened a “pandora’s box.” Citizens have the ability to spend and save as much or as little money as they desire. How they save is also more open ended. Some enjoy this new found freedom, while others feel they are being presented with too many choices. Locations and age differences shaped how persons save their money, with older people purchasing houses and younger people more willing to enter the emerging stock market. 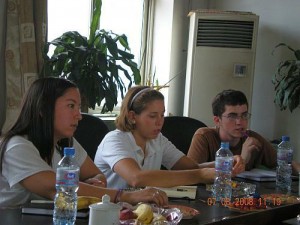 My research examined the introduction of Western medicine in a society traditionally centered around Eastern medicine. In studying Eastern medicine, I came to realize that we must understand the culture and history that are deeply engrained within traditional Chinese medicine before we can begin to understand the science behind what we often categorized as “alternative” or “holistic” practice. After completing my research in Beijing, Shanxi and Sichuan, I believe we should no longer see the two medicines as separate medicines, but rather seek to blend these two traditions into a single one. The medicine practiced in China is an all inclusive one that incorporates thousands of years of knowledge but this could also be strengthened by incorporating the technology and precision of the West.

The focus of my past summer’s research was to explore the various methods of waste disposal across a wide range of locations within China, and then to consider what problems are emerging due to the abundance of waste that China produces, what actions are being taken to remedy problems created by waste, and finally how this waste affects the lifespan, lifestyle, and health of individual Chinese. The timing of my project was fortunate. On June 1, 2008, China’s government implemented a nation-wide policy that prohibited the distribution of free plastic bags and outlawed the manufacturing of thin, poor quality plastic bags. Since this policy was directly related to my research, I wanted to closely follow the implementation of this policy, and therefore, I constructed two surveys to seek to discover the efficacy of this new policy. I also interviewed several leading environmentalists in China, including Timothy Hui, Chief Representative of the Natural Resources Defense Council (NRDC) of China, Cindy Lin, a NRDC waste management expert, and Ma Jun, the Director of the Institute of Public and Environmental Affairs. China’s pollution probem is one of the world’s most severe, yet criticizing China for its rapidly deteriorating environment will solve nothing. The world must work with China, and not against it.

For this research, I set out to understand how religion is perceived in China, and considered several key questions. Is religion becoming more widespread? If so, is this because it meets an individual’s moral and spiritual needs? What exactly is religion to the Chinese, and to what degree are Chinese religious? What I discovered is that acceptance of religion in China is closely linked to Chinese culture and that it is not related to morality, spirituality, or an individual’s personal beliefs. Religion in China is something that is fluid and practical. Whether Buddhist, Daoist, Christian, Muslim, or non-religious, many Chinese participate in such religious activities as praying and burning incense for good luck, good fortune, and good health. For the Chinese, it is alright to be a Christian and also pray to the Buddha. Chinese religion today is a reflection of Chinese cultural inclinations.