Immigrants in Singapore:
A Study of Connections, Class, and Country 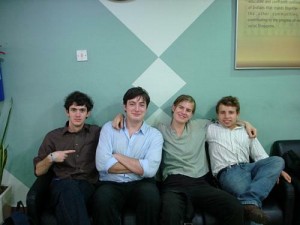 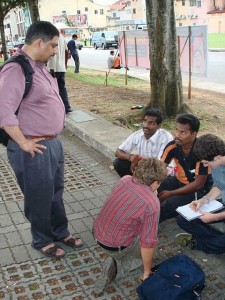 This project provides a case study of the economic and social transformations that migrants undergo when leaving their home countries to work somewhere else, and how these transformations, in turn, influence the immigrants interaction with their country of origin once they return. A three pronged research agenda was utilized to achieve these aims: 1) working to establish a background analysis as a foundation for our work in Singapore, 2) collecting data in Singapore, 3) analyzing the data collected in stage two to produce three papers and prepare presentations for those at Earlham College and at undergraduate conferences.

Work in stage one proved more difficult than anticipated because we underestimated our ability to coordinate our work across three continents! The four student members of the team were in three continents during the spring 2008 semester (two in New Zealand, one in Mexico, and one at Earlham). However, when we arrived in Singapore, the group was ready with a list of academics, journalists, and other connections who could be relied upon to help with data collection. In short: we knew enough about Singapore and immigration to learn more about Singapore and immigration.

Our time in Singapore was a tremendous success. We met with a number of individuals and organizations who gave us invaluable information about different immigrant groups in Singapore. Working our way through our contacts we managed to collect data from more that 150 people cutting across class and national origin. In addition, we interviewed a number of people, including professors at the University of Singapore; community activists at SINDA-the Singapore Indian Development Association, a group which works with the Indian community; the chair of the Singapore Indian Chamber of Commerce; executives at Western Union; principals in schools where Indian, American and British children attend school; as well as community groups associated with American and British citizens in Singapore. We gathered data from the parents of school children, individuals dining in restaurants, immigrants who gather socially at a public square on weekends, and those who attended the July 4th celebrations in Singapore. Casting a wide net we caught a lot of fish!

At this point, we are confident that there is much we can say about the connections maintained by immigrants with their home countries based on their class, nationality and when they were last in their country of origin. This semester all four students who were part of this project are taking a one-credit independent course with Professor Krishnan to further analyze data and complete the preparation of papers and presentations. 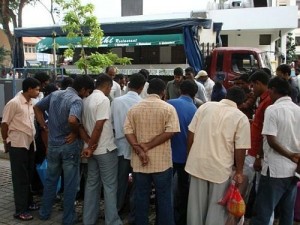 As a member of the Earlham research team, I had the opportunity to examine questions of identity and community in American, British, and Indian populations residing in Singapore. These questions also led us to develop an understanding of the impact of immigration on the construction of national Singaporean identity in a multi-ethnic population. We asked questions that placed immigrant experiences in the context of how global labor systems impact the way people view themselves in the world. Understanding the complexities and perspectives within the Indian community was especially important to connect political and economic trends in India, Singapore and the rest of the world, and to consider the way individuals and groups felt about their national and ethnic identities. 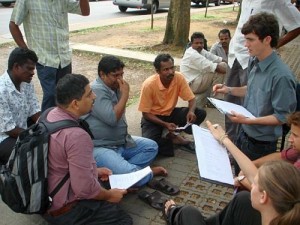 In Singapore, we heard many stories of immigrants from the subcontinent. Academics, construction works, university students, social workers, and many others all weighed in. I was particularly impressed by the variety of stories that revealed how people ended up in Singapore, whether they liked it, what their ambitions were, and so forth. Our goal is to see what the larger narrative is that emerges from these individual stories. By grouping stories by certain social distinctions (class, religion, profession, time since arrival in Singapore, and so forth), we hope to discern patterns that might inform the larger narrative. We hope to be able to compare data about the Americans and British in Singapore.

Thanks to my experience in Singapore, I have returned with a fuller, though certainly not complete, understanding of certain aspects of immigration and societal integration. I have also learned about the research process, and how to work from an idea to analysis, all the while adjusting to newly discovered realities or parameters. I have gained invaluable experience in conducting interviews and gathering data 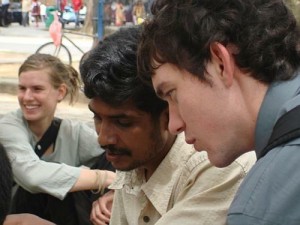 Our work in Singapore involved speaking to people and collecting data. While I learned a lot about collecting statistical data, what excited me the most was the informal methods used to gather information, i.e., having conversations with taxi drivers, waiters, and shopkeepers. We were pleasantly surprised by how open people were to conversing with us. Research on the internet or time spent in libraries cannot be compared to the act of simply talking to people. 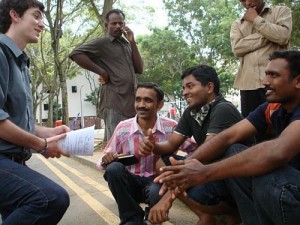 Coming from the Czech Republic and being an international student at an American college, I find issues of immigration and settling in foreign countries relevant to my experiences. Spending more than three weeks in Singapore studying American, British, and Indian migrants and expatriates made me realize how complicated and interrelated are the issues and questions behind migration. Interacting with journalists, academics, and community activists, I learned a great deal about the economic and political development of Singapore, about global and multicultural cities, and a lot more than I expected about Indian-languages, religions, customs, and food. Our group found out how much work, preparation time, collaboration, excitement, and disappointment comes while doing field work and interviewing people.