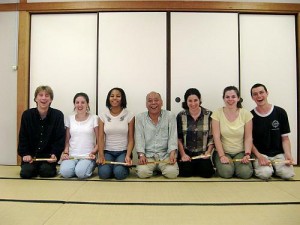 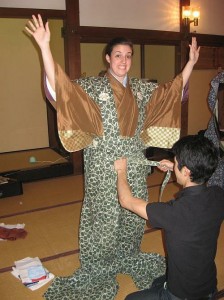 The students at St. Mary’s College spent twenty-seven days in Japan, learning a kyogen play in Japanese with a professional actor and teacher from the Okura school of kyogen. The culmination of the experience was a performance on a centuries’ old noh stage at Yasaka Shrine in traditional kyogen costume. On the days we were not rehearsing, we attended traditional Japanese theatre performances and visited temples and gardens. Each student studied an additional traditional cultural activity such as wearing the summer kimono (yukata), noh mask making, and Japanese calligraphy (shodo). Student Ian Prince wrote a contemporary kyogen-style play that will be performed at the Bruce Davis Theater in October 2008 in conjunction with our English language kyogen performance. 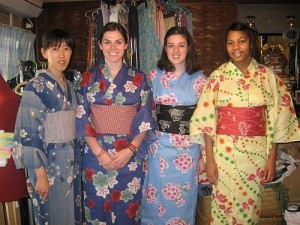 In my research of traditional Japanese theatre, focusing on kyogen, I learned there are dramatic differences between Japanese and Western theatre. Maruishi Yasushi, a professional Japanese kyogen actor took the time to teach us a kyogen play, Iroha, in Japanese along with a traditional fan dance called Tsuchiguruma, and songs sung during or after performances. From this time spent in rehearsals and in seeing Japanese theatre for myself, I saw some dramatic differences in the way Japanese theatre operates as opposed to Western theatre. Japanese acting is more methodical and focused on movement, vocal techniques and precision. There is little to no room for personal interpretation or even an assigned director as the plays have been known and performed the same way for centuries. The performances combine dancing, precise movement, specific vocal inflections, instrumentals and singing to create something beautiful every time, even if the audience is overly familiar with the play. Western theatre does not operate in such a methodical way, but rather relies on the director’s vision and interpretation to reinvent plays instead of simply recreating them, as the Japanese do. This research gave me the desire to teach acting communities about the Japanese style of theatre and perhaps add a little more precision to our Western style of acting. 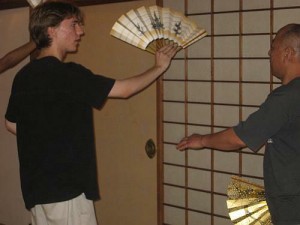 While in Japan, my fellow program participants and I attended a venue of three kyogen plays performed at the Kyoto Furitsu Bunka Geijutsu Kaikan (Kyoto Prefectural Center for Arts and Culture) by the Shegeyama actors of the Okura school of kyogen. As I experienced the aesthetic process of kyogen firsthand, rehearsing under the guidance of professional kyogen and stage actor Maruishi Yasushi Sensei, I fully grasped how ma (the space in between) is the essential element of Eastern performance. Among the performance studies under Maruishi Sensei’s direction was an elegant fan dance titled Tsuchiguruma. The dance involved simple, gliding movements of varying speeds and carefully placed moments of stillness. Though my experiences grasping ma in the world of traditional theatre help me grow as a performer, it is my experience learning the silence and stillness within shodo, “the way of writing” or “the practice of calligraphy,” that are among the most spiritualizing of my life and that help me grow as a human being. In Kyoto, I looked forward to every Wednesday evening when Noda Yoshie Sensei, my calligraphy teacher, helped cultivate in me further insight into the rhythm, balance, grace, creativeness, and self-expression inherent in the Kampo style of calligraphic writing. 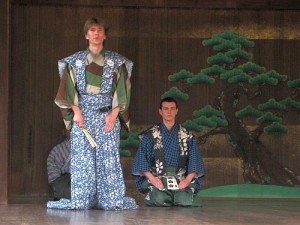 I traveled to Kyoto earlier this summer with a small group of peers and Professor Holly Blumner to study kyogen theater. While in Japan, we had the very rare opportunity to study on a daily basis with a professional kyogen actor. We will be returning to our college this fall to perform the kyogen pieces we learned in Japan, and apply the training we had to teaching fellow students about kyogen. Aside from educating our fellow students, we will also be giving performances and workshops for local high schools, with the hope of increasing interest in Japanese culture. I am personally using the knowledge gained in Japan to write a kyogen play, which will be performed along with the pieces we learned in Japan. Our trip to Kyoto has broadened my mind and taught me to think, write, speak, and act in a different artistic style. I have benefited enormously from my exposure to kyogen. For instance, my traditionally Western conceptions of artistic method have changed, and my creativity has increased from seeing how comedy, movement, and dialogue are constructed in traditional Japanese theater. 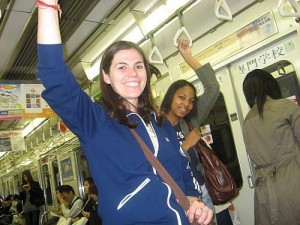 This experience has taught me a lot about myself and other cultures. While in Japan, I got a chance to think “outside of the box.” I was able to learn a new style of acting, and gain much knowledge about Japanese culture. I learned that it takes a lifetime to perfect the craft of acting in Japan, and that men are the majority of actors in Japan. I learned Japanese interpersonal etiquette between human beings and their concern about respect one to another. I learned how to put on a yukata kimono. Most of all, I learned how to appreciate life and this experience. It was beneficial to become part of another culture for a month. This has truly been the best experience of my life so far.

I went to Kyoto, Japan to study, learn, and eventually perform kyogen theater. I was fascinated by how intensely methodical the process is of learning traditional Japanese theater. We learned kyogen in the traditional way. We greeted and thanked our sensei in Japanese before and after each rehearsal, sat in seiza style sitting on our legs during recitations of songs and lines, and we even washed the state at Yasaka Shrine (a customary tradition for actors) before performing. I was also able to take lessons on how to wear yakata, the summer kimono. I will be performing kyogen again with my peers at St. Mary’s College as part of our fall play, utilizing what I have learned about both kyogen and kimono in Japan. It is my hope and my goal that this performance will not only share what I experienced and learned in Japan, but will also help inspire interest in Asian performance practices and culture in other students at St. Mary’s.