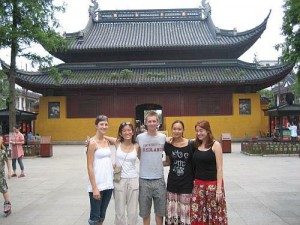 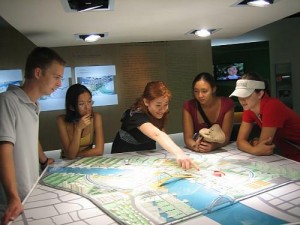 The transformation of space in China’s largest city, Shanghai, has been remarkable, and consequently, Shanghai has been labeled the “most happening city in the world” (The Guardian). Post-Mao urbanization and global forces have influenced the concept and organization of public space in urban Shanghai, which resulted in enormous impacts on the city’s appearance and on the lives of Shanghai’s residence educationally, economically, socially, culturally, and environmentally. The purpose of this collaborative field research was to explore the transformation of the urban public sphere in terms of spatial/physical forms and consider the social and cultural implications. With the help of locally hired translators, the five University of Redland’s student fellows conducted individual fieldwork at Shanghai’s gardens, parks, Western food outlets, and university and middle school campuses. They visited museums, traditional gardens and parks in Shanghai, Suzhou, and Hangzhou during the over 4 Â½ weeks they were in China. Sara Adams analyzed the relationship between the growth and development in a big city and the operations of middle school public education; Jessica Irby examined policies and public use and the impact on the environment of Shanghai’s open space parks; Iyleen Ismail explored how contemporary physical renovations of university campuses influenced higher education; Cassandra Peisel surveyed the impact of Western food chains on urban values, attitudes, street scenes, lifestyles, and social trends; Brian Wobst examined the dynamics between traditional space preservation, the tourist industry, and contemporary urban development through the lens of the well-preserved and tourist-bound Yu garden. The collaborative research team plans to present fieldwork findings through on-campus events, such as “Exploring Asia” night, and Asian Studies and Chinese Club activities. In addition, the team plans to post findings and pictures on the Asian Studies website.

The collaborative research trip to Shanghai this summer has made a big difference in the academic and personal lives of the five student fellows. They have gained academic and personal growth through this short-term international educational experience, and they came away with an exponentially enriched understanding of Chinese culture, people, social and economic changes, and what it means to do fieldwork in a cross-cultural context. The trip influenced the career-paths and world views of the students involved. The students were able to apply what they have learned in classrooms and books to the classroom of the world, and to enhance not only their social interaction and communication skills, but also their Chinese language proficiency. They also became more tolerant of cultural difference, aware of cultural heritage, and self-confident in interacting with people from a different culture. The trip enabled them to realize that they held cultural values and biases that they were not even aware were ingrained in them. It also provided a rare opportunity for collaborative inter-dependent teamwork and a test of problem solving skills. We owe this great experience to ASIANetwork and the Freeman Foundation 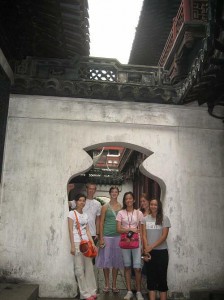 The Chinese system for educating its massive populous seems to constantly be in a state of transition, morphing depending on what it seems a person needs in order to be a productive member of society during any given dynasty, reign, or era. Today, Shanghai is almost literally exploding with energy and the construction of roads, buildings, metro stations, and so forth is seen everywhere. During visits to elementary, middle, and high schools, it is apparent that the rapid urbanization of Shanghai is having a huge affect on K-12 education. My research focused on the impact of urbanization (demographic changes, advanced transportation systems, and budget redistribution) on Shanghai’s secondary schools and on the rising standards, increased focus on critical thinking, the influx of international students, teachers, curricula and changing values evident in education.

This research enabled me to see K-12 education in a culture very different from my own, in a society with different goals, values, and resources. I also was able to study Chinese urbanization in a city growing perhaps faster than its skeleton can support.

Jessica Irby – “The Use of Open Space in Shanghai” 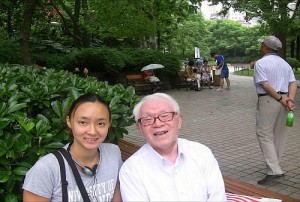 I have learned from my fieldwork research in five parks in Shanghai that transforming land into parks has had both positive and negative effects for the community and for the environment. Negative effects include the destruction of homes and movement of individuals to new locations. The construction of parks also creates pollution in the form of dust and noise. Positive effects include the environmental benefits that come from planting trees, creating ponds, and adding green space. Parks become refuges for wild birds, frogs, fish, turtles, insects and flowers. Trees provide shade and clean air for the city; the parks provide a cool place for workers to rest and friends to meet; and the open space brings the community together culturally with singing, dancing, music, art, martial arts and healthful exercises. The movement to create parks, according to two persons I interviewed began only recently, ten to fifteen years ago, but it has gained strength rapidly, and equally important, this has fed environmental consciousness among the Chinese. Increasingly, young Chinese are adopting formulas to reduce, reuse and recycle.

My trip to China has had an enormous impact on my world view, and on my professional development. I now see America and China in a totally different light. I have abandoned stereotypes about the Chinese. I now understand more about my Chinese heritage, and my Chinese language skills have improved significantly. In addition, I have discovered that in some cases Chinese policy does protect green space, air and water quality, and endangered species. 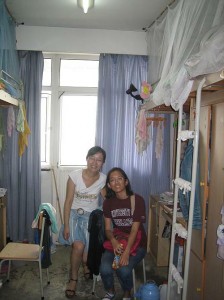 The objective of my research is to examine how the recent renovations of China’s universities have affected college students, faculty, and campus lifestyle. While I focused my research on Fudan University, I also visited and interviewed students at two other universities in Shanghai: East China Normal University and Shanghai University of Traditional Medicine. I interviewed a wide range of individuals including undergraduate students, graduate students, and faculty members. I discovered that individuals at these universities have not only witnessed a change in classroom facilities and living conditions but also a social transformation in classroom dynamics and student life. Students’ living conditions have improved tremendously as dormitories have been upgraded and better access to cafeterias and libraries has occurred. In classrooms, professors are more willing to involve students in open discussions and to support group presentations. Students still enjoy a rich social life outside the classroom and participate in a broad range of extra-curricular activities such as debate, theatre, various clubs, and convocation lecture series. There is an increased commitment to renovation of older buildings, rather than constructing new ones, and to funding faculty research endeavors.

This month-long summer research experience in Shanghai has enabled me to improve my ability to conduct fieldwork interviews. It also led to a fundamental change in my pre-conceived notions and bias about China. I discovered that the younger generation in Shanghai is very cosmopolitan and independent. They are practical-minded and optimistic, and they are concerned about their individual success and their future. My research enabled me to gain a valuable perspective on university life in urban China, and to understand what it means to be a Chinese college student. I discovered that Chinese are friendly and willing to answer a range of interviewer’s questions. 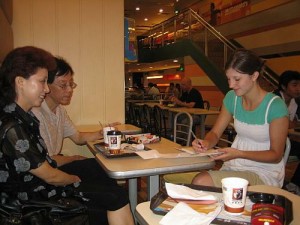 I undertook my research in twenty-two different fast-food establishments in the commercial center of Shanghai. I discovered that the people of Shanghai view fast food as American food and value it because purchasing it eliminates the time they must wait to eat it. It is also clean and provided to them with friendly service. I read a great deal about the fast food industry before preparing my survey questions. When surveying customers the managers of these restaurants were suspicious, almost paranoid, of my actions and not supportive of my research, but the customers themselves were helpful.

When I first started this project, I was certain I wanted to pursue a career in global business. However, because business owners and managers were less forthcoming than were their customers, I found greater joy in working with customers and discovering insights about them, than in probing more deeply into the behaviors of corporations. This research helped me strengthen my interviewing and field research skills. 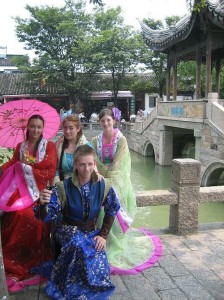 My field research in the Yuyuan Garden helped me to more fully discover the substantial amount of time, money, man power, and resources dedicated to preserving it. It also revealed that Chinese feel it is better to maintain a historical place, like Yuyuan, and ensure that it looks precisely like it did when it was originally built than to leave it as it is in the hope that the site will seem more authentic. The interview questionnaires I devised were divided into three specific areas of inquiry, each with ten to fifteen questions that dealt with the history of the garden, business practices related to the garden, and finally how the garden is perceived by different persons. I discovered that the restoration of the garden has been so well done that people are unable to determine whether or not the garden has been rebuilt, even though it is certain that the garden was at one time occupied by foreign forces and sustained large amounts of damage. It is also clear that since the garden was deemed a national landmark in the 1980’s by the central government it receives budget increases yearly to help preserve it. It is certain that the garden will be maintained as it currently is even as Shanghai is modernized around it.

I feel my life as a college student was significantly altered due to this trip to China. The first-hand experience in Shanghai, Hangzhou, and Suzhou add depth to my understanding of the novels, textbooks, journal articles, and newspaper essays I read about China. As a global business major interested in finance, Shanghai provided me with a priceless opportunity to view one of Asia’s ascending financial centers. 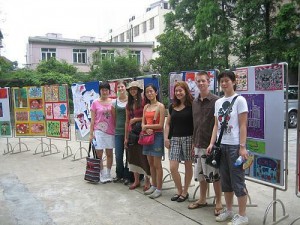