Kansai and Kyushu:
Roots and Routes of China-Korea-Japan Interconnections 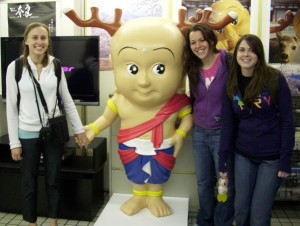 On 08 June 2009 at Osaka Itami airport, I saw off the three students who participated with me in the ASIANetwork Freeman Foundation sponsored research trip to Japan. We had spent a little over four weeks together travelling in Kansai and Kyushu. I must say that now I have a more nuanced understanding of what it means to be an academic mentor.

On Coastal Carolina’s campus, students drew inspiration to work from the academic environment itself. During the Spring of 2009, before departing for Japan, the three student participants each organized their preliminary research findings into a 5-page conference paper. Although all three submitted abstracts to present at the Big SURS Conference at the University of North Carolina at Asheville and were invited to present their papers, only one student, Yelena Ninichuk was able to take advantage of this opportunity. This paper, entitled “Search for a National Identity: Korea after Liberation,” was accepted for publication in the Conference Proceedings. However, the other two student participants were able to present their preliminary research as part of an Asian Studies lecture series on the Coastal Carolina campus in April just before their departure.

In Japan, student researchers, as expected, found excitement in every little thing but for the most part were unable to channel that energy towards their individual projects. The most mature of the three, Yelena Ninichuk, was the only one who grasped the importance of completing the brief supplementary readings, participating sincerely in the hour-long morning discussions, and keeping a regular academic journal, in which she integrated the notes she took during the site visits. Since returning to Carolina, Ms. Ninichuk’s research continues and she plans to participate in an undergraduate research competition during Coastal Carolina’s campus-wide conference in February 2010. She also intends to collaborate with Victoria Poston on a panel dedicated to Nagasaki.

The research I conducted for the ASIANetwork Freeman Foundation grant has helped me develop a clear sense of my future. The paper I wrote in March 2009, entitled “Search for a National Identity: Korea after Liberation,” combined multiple sources and opened a door, especially when I learned that the conference organizers selected my paper for publication in the conference proceedings. While in Japan, every day was filled with experiences that gave new life to the research I completed beforehand. For instance, in Nagasaki, I walked the streets where the second atomic bomb hit and had the rare privilege to speak to Yamawaki-san, a hibakusha (an atomic bomb survivor). This experience surpassed any reading about the events of that day. The research I did prior to traveling to Japan dealt primarily with East Asian women and the roles society cast upon them. I also studied the relationship between Japan and Korea during Japan’s occupation of the country. I saw a correlation between the expectations of women and the Korean nation. both were defined as weak in the eyes of Japanese imperialists. I began to wonder if identity is determined only by those dominating society or if that identity can be defined by internal forces. While studying in Japan this past summer, I also expanded my range of exploration to include the role Buddhism has played in defining Japanese identity, the past and current interaction between China, Korea and Japan, how museums in Japan present this historic interaction. I am now writing a paper on “East Asian Women: Exemplary Lives of Fulfillment through Sacrifice.”

My comparative study of literary and historical (including museum) representations of East Asia’s warriors relies on sources such as Chushingura, Sun Tsu’s The Art of War, selections from Luo Guanzhong’s Three Kingdoms, and from various Buddhist texts, and seeks to gain an understanding of the ways in which the warriors of East Asia learned and executed their ideals. Together, the samurai of Japan, the wuxia of China, and the lesser-known hwurang of Korea have shaped the image of the East Asian warrior as one that combines physical, spiritual, and emotional strength with intellectual and artistic excellence. The richly textured experience in Japan visiting sites like the Todaiji, the imperial palaces and villas in Kyoto, various national and regional museums, and also Nagasaki and an atomic bomb survivor has deepened my understanding of East Asian perceptions of warriors as I seek to deepen this comparative study.

My research focuses on bridges between China, Korea and Japan that facilitated the spread of Confucianism to Japan. As the research group travelled through Japan, I searched for evidences of Confucianism. At our first stop in Nara I started worrying: nothing seemed to be about Confucianism. The temples were Buddhist, the shrines were Shinto, and the Nara National Museum never even mentioned Confucius. Few Japanese, guides or ordinary people, knew much about Confucianism or felt that it had left an important mark on Japanese identity. While in Fukuoka (known also as Hakata), I began to focus more on the paintings, ceramics, bronze objects and weapons imported from the continent during the Tang dynastic period in China (7th-9th centuries), and realized that this was a significant entry point in Japan for religious and philosophical texts from the continent as well. Envoys departed from Hakata Bay for China and returned from China to this same place. We later travelled to Nagasaki where I visited one of the few remaining Confucian shrines — koshi-byo — in Japan. Finally, in Nagasaki, I was part of an amazing conversation held with a hibakusha, a man who had lived through the horrors of the atomic bombing. During this conversation I came to realize that he had embraced an important tenet of Confucianism in that he believes that the retelling of his story will help bring harmony,  a key Confucian concept, to the world.