The traditional Japanese diet (i.e. high proportion of vegetables and fish, low fat and small quantity meals with a variety of dishes, emphasis on freshness) has been considered one of the healthiest in the world. However, rapid economic income growth and new life-style have led a movement away from traditional forms of sustenance towards more factory processed refined foods. Today, Japanese are consuming more sugar and fat and oil rich foods. The new taste of foods, especially among young people, can set a lifelong precedent in their eating habits. Our research suggests a strong co-relationship between Japan’s foodways and the following social factorsâ€”the earlier ages of children attending juku (cram schools); the rise in female labor participation; the increase of single-person households; the globalization of food chains; the industrialized food manufacturing; fast-food technological advancement; lack of time, and concerns about food safety.

The following activities are being undertaken in order to present our research findings during the 2009-2010 academic year: 1) personal class presentations on the campus of William and Mary by individual participants in the program dealing with a range of topics from “Food, Beverage and Communication in the Japanese Business Firm,” by Jeff DeMars; to “the Politics of Politeness: Meals and Manners in Modern Japan” by Nathan Revere; to “Nominication: the Role of Food Culture in Relationship Building,” by Sam Davis; to “Youth Culture and Digital Communication,” by Loretta Scott; 2) group presentations such as one on “Food and Ritual in Modern Japan to the Japanese Cultural Association in November 2009, and “Changing Foodway in Japan” to a Contemporary Issues in Japanese Society class in the spring of 2010. 3) off campus presentations such as a video presentation entitled “Travels and Research in Japanese Society,” by Loretta Scott to the Virginia Governor’s Japanese Language Academy in July 2009 at Virginia Commonwealth University; a poster session presentation at the 108th Annual Meeting of American Anthropological Association in Philadelphia, December 2009; and a poster presentation at the Spring 2010 meeting of the ASIANetwork in Atlanta, Georgia.

Of the many trips taken to Japan, this research experience has been the most impactful on my future plans. My responsibility in this group study has been to analyze the culture of drinking in Japan. All data collection for the research has been completed at this point. Interviews and contact with business people, the research itself, and the practice in conducting and organizing a research trip of this magnitude have all helped me understand through experience what I want to do with my future. Over the course of this year I will analyze my data and establish a report on my findings which I hope will eventually culminate in a publishable paper on Japanese communication and food culture. I have always had an interest in societal problems such as suicide, depression, alienation, racism, etc. but never thought that interest could turn into fruitful efforts at solving this myriad of problems. For the past seven years I have studied Japanese and engaged in various cultural exchange programs, but never decided whether I truly wanted to live in Japan or not. I now know that research is a valid career option for me and that academic pursuits can be applied to the business world as well. As a result, I have decided to apply to graduate school in Japan to continue my education. My short-term goal is attainment of the highest certification of Japanese language proficiency. During my time at graduate school, I seek to become involved in an East Asian NPO or INGO’s and food-related service activities such as takidash, the Japanese version of a soup kitchen for the homeless. I hope to remain in Japan working on social problems such as suicide and shut-ins after that.

My chief research responsibility for this study has been to analyze the roles of food and drink in corporate communication. For one month, with four of my peers and my faculty mentor, I collected ethnographic data related to my individual topic by visiting companies, organizations, and homes throughout the Kansai and Kanto regions of Japan. Normally, I personally conducted my interviews, and afterwards ate lunch with the person interviewed based on his/her normal lunch habits. Occasionally, I also participated in post-work socializing between company employees. I quickly discovered that food and drink are virtually inseparable when conducting business in Japan, and that they are believed to ease communication, while helping employees form meaningful and intimate relationships. Moreover, the opportunity to use a new language, to interview Japanese businessmen and women, and to be completely immersed in the local culture has been invaluable.

My chief responsibility in working with our research group has been to investigate the changing foodways in the Japanese household. As my study commenced, I quickly discovered the perception that “kids these days eat unhealthy foods.” As I sought the cause for growing obesity in Japan, a number of possibilities were considered including: 1) a change in family roles has led women into the work force and away from their traditional work in the home as cooks forcing the family to eat more fast foods and less nutritious ones; 2) the growing “taste indifference” in children, suggesting that their taste buds are dying which leads them to eat more strongly flavored and less healthy foods; 3) the growing commitment of students to “cram schools” leaves them little time for things other than a simple meal. Never before have I started a research project of this scale on my own. However, somehow through the countless meetings to determine things like logistics, interviews, and even foreign cell phone rentals, I gained confidence and realized that I am fully capable of developing projects of this scale. This has been an important thing for me to discover now that I have graduated from college and confront the “real” world. 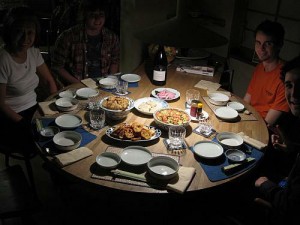 My charge in working on this group project has been to better understand how politeness and etiquette shape Japanese society. To do this, I personally conducted several dozen interviews for a total of almost twelve hours of interview footage. I and my colleagues also took numerous pictures and film of Japanese material culture, of food in varied forms and ritual settings, and of our research while in progress. In studying etiquette, I examined it in three primary categories: that which is concerned with gods (Buddhist and Shinto), with form (tea ceremonies, holidays, and ritualized or special meals), and with human interaction, for instance, the Japanese notion that one must be polite for the sake of “not giving other’s bad memories.” Traveling to Japan and doing ethnographic fieldwork opened my eyes to new professional possibilities, most notably, the field of anthropology, which lay at the intersection of my two loves: culture and language. I am currently considering graduate studies in the fields of Anthropology and Linguistic Anthropology.

My research responsibility in this study has been to examine youth culture and digital communication. While in Japan I was exposed to the hybrid culture of Japan, a mix of familiar modern prosperity and a deeply laid sense of tradition that was present in the landscapes, daily culture, language, and the people in such a delicate way that I will be changed forever. In Japan, we spent a week together travelling throughout the main metropolitan areas (Tokyo and Osaka) interviewing people daily in both formal and informal settings. Formal interviews were recorded digitally with supplementary notes, and informal interviews were conducted on the streets, on buses, trains, and in other public places to gain a more general sense of public opinions. I continue to study the possibilities of how to use new media and technological tools to promote the study of Japan. My goal is to enter the Japanese pedagogy program at Columbia University in 2010.