National Memories in Action:
Peace and Nationalist Museums in Japan 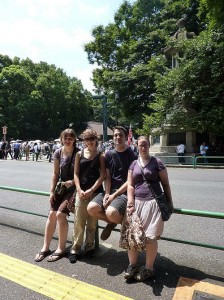 Our group visited twelve Japanese museums over a twenty-one day period to analyze how Japanese museums narrate history about Japan’s war years and in what sociopolitical contexts. We also considered the structure/agency debates related to museums that are so critical for social science and history and how these are evidenced in different museums. We discovered that all but three of the museums present emotional narratives through the use of individual written and recorded testimonials, personal drawings, letters and diaries, still photographs, videos, and a wide range of artifacts from daily life. The most intense, most detailed accounts, with the richest displays and collections are dedicated to the tribulations of Japanese. We also noted that there are different theoretical frameworks that distinguish the museums. The “peace museums” and the Edo-Tokyo Museum place responsibility for the war with specific political decisions taken at particular historical junctures. Other museums present history as something that unfolded without agency on the part of Japanese. Instead, historical events and eras, particularly European and American imperialism, caught Japan in their flow, bringing great suffering to the Japanese people.

Students have four types of presentations planned for sharing their research findings: a paper intended for submission to The Wittenberg East Asian Studies Journal; individual and paired oral and slide show presentations to the St. Olaf community; a blog they begun during the spring of 2009 at http://japanesewarnarratives.blogspot.com/; and a poster presentation at the April 2010 ASIANetwork Annual Conference. In presenting this research, the group will seek to show what kind of narrative is presented in Japan about the war experience: Japan as a leader in the international peace and nuclear non-proliferation movements (Hiroshima); Japan as a proud nation with a long, honorable martial history (Yuushukan); and Japan as a nation that enjoys peace and prosperity due to the sacrifices of those who suffered during the Asia-Pacific War (Showakan, Shokeikan, Heiwa Kinen, Kaiten Kinenkan, and Yamato).

I explored various museums throughout Japan and compared narratives of the Asia-Pacific War. Researching these differences led to an understanding of the complex role of Japan in current international relations as the country struggles with its past. Also, I gained an understanding of how the presentation of material can influence an understanding of the meaning of history. This project has allowed me to think in a whole new way not only about research, but also about international relations and my own responsibility to present a valid assessment of history in a global world.

After three weeks of initial research in Japan, we all continue to benefit from our findings, and we look forward to sharing our work both with ASIANetwork and a wider audience. Having studied the ways in which Japanese museums construct their narratives to suit their own ideologies, I have learned that all histories are myths much in this same vein. History as a standard, unchanging institution does not truly exist, since “history” is much messier, consisting of multitudes of individual, conflicting stories that contribute to any number of open-ended narratives.

My three weeks spent researching in Japan were some of the most exhausting and fulfilling weeks of my life. Every museum we visited gave us something entirely new to think about and showed us how many layers of complexity there is to what is taught as a simple narrative in high school. It also showed me the many years of study needed to fully understand the political intricacies involved in the debate over the WWII narrative. The highlight for me was being in Hiroshima on August 6th and seeing the diversity of people at the memorial ceremony.

From July 27th until August 16th, 2009, I studied eight museums in Japan and observed crowds on World Peace Day and the anniversary of Japan’s surrender. While in Japan, I sought to discover “What is Japan” and what museums tell us about Japan. I became acutely aware of the importance of narratives in recording history and establishing national identity. I also came to realize how careful one must be because narratives will not tell us everything we need to know.