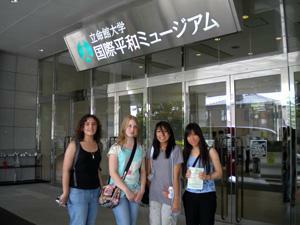 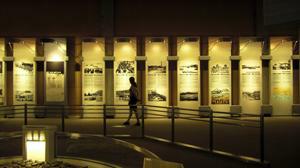 The purpose of this three-week research experience was to investigate how WWII memory was constructed and presented in different war/peace related museums in Japan by spending one week each at the Hiroshima Peace Memorial Museum, the Kyoto Museum for World Peace, Ristumeikan University, and Yushukan (Yasukuni shrine museum) or the Japanese Overseas Migration Museum. Each student had a different focus and methodology. Student research topics focused upon: comparing and analyzing English and Japanese narratives on the use of the two atomic bombs, investigating how the Showa Emperor Hirohito is portrayed and exhibited in each museum, and finding out how the Japanese people in Japan view Japanese-Americans during WWII. Two students worked on the third topic, each focusing on Japanese-American internment camps and the U.S. Army’s all-Nisei 442nd Regiment. 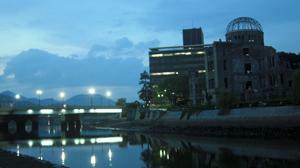 Professor Fujiwara’s language students used their Japanese language abilities to conduct their research and their achievements surpassed her expectations. They became more aware of the power of language as a very effective tool to express ideology. The following are preliminary findings that each of the four student researchers found in common: 1) some views and information about WWII found in U.S. museums were either not available or different in Japanese museums; 2) each museum presented its own ideology by selecting what to exhibit and demonstrated quite different views on the same war events; 3) language choice plays an important role in conveying each museum’s message, and 4) the English translation of Japanese does not necessarily carry the same nuance that the original Japanese carries. Besides these shared findings, Fujita and Wada found that information about the involvement of Japanese-Americans in WWII is not readily available in Japan. 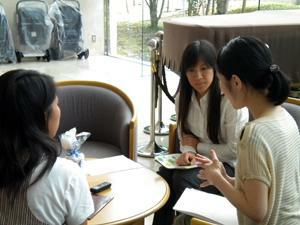 I worked with Amy Wada to conduct research on “Japanese Presentation of the Japanese-American Experience during World War II: Japanese-Americans as Civilians and Soldiers.” We found in interviews with the museum curators at the three museums we visited that the individual experiences of each were dramatically different and shaped their responses to our questions. What I sought to discover was what they felt was the difference between being Japanese and being Japanese-American. Oseto-san said he believed that Japanese-Americans are “extremely close” to Japanese people because of their shared lineage, which gives them the same appearance, language and culture. Kanekiyo-san, who from the age of four to six lived with her family in California, said that if she had remained in the United States she would probably identify herself as Japanese-American and not Japanese. She held the view that the concrete difference between Japanese and Japanese-American people is the passport they hold. Kojima-san believes that whether one is Japanese or Japanese-American is defined by how one defines himself/herself, in short, it is self-determined. From these interviews I came to believe that there is no shared answer to what determines whether one is Japanese or Japanese-American. Nonetheless, I came through this research to realize that Japan is so homogenous that the average Japanese person has no awareness of being Japanese. There is nothing to challenge one’s Japanese-ness, nothing else with which to compare or contrast one’s own cultural identity. Consequently, “Japanese culture” is most valued by those who have been cut off from it. 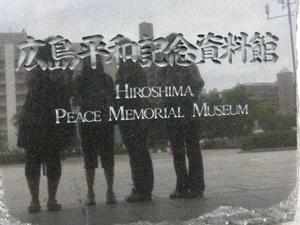 My research topic is entitled: “Learning Perspectives through Language: An Examination of Language Used to Talk about the Bombings of Hiroshima and Nagasaki.” While visiting museums in Hiroshima, Kyoto, Tokyo and Yokohama, I sought to find out if there is any difference in the Japanese explanations and English translations of them dealing with WWII, especially the controversial atomic bombings of Hiroshima and Nagasaki. Spending time each day copying Japanese characters by hand and looking up kanji that were unfamiliar to me improved my reading and writing skills and increased my academic vocabulary. It also provided me with a window into the world of literary translation, something I may pursue after I graduate from college. I have not completed enough of the translations yet to make a definitive statement about whether or not the translations from Japanese to English are direct ones. However, my work to date suggests that the Kyoto museum seems to carry a liberal bias, Tokyo’s appear very conservative, and the Hiroshima museum does a fairly good job of being neutral except in their forceful call to abolish nuclear weapons. 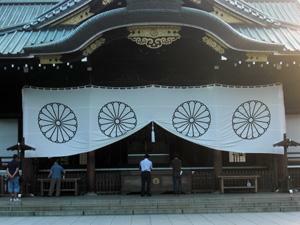 During my time in Japan, I searched for information and narratives about the Showa Emperor whose omission from the war crimes trials following the war has made him a controversial figure. I was quite struck by how differently he is portrayed in the museums we visited. The museum in Hiroshima hardly mentions him, while those in Kyoto and Tokyo are organized around the reigns of various emperors so the Showa Emperor is a running theme throughout their narratives. While the Kyoto Museum for World Peace condemned the imperial system as responsible for unnecessary deaths and violence, the Yushukan Museum in Tokyo glorified the same events. It is apparent that information conveyed in each museum has been carefully chosen to communicate a particular message to visitors. 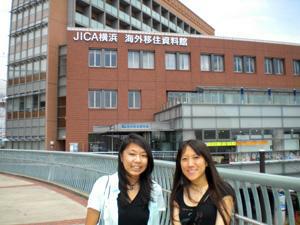 The purpose of Jennifer Fujita and my research is to see how the Japanese-American experience in World War II, including the forced relocation of them to internment camps and their participation in the 100th Infantry Battalion and 442nd Regimental Combat Team, is presented to the Japanese public at the Hiroshima Peace Memorial Museum, Kyoto Ritsumeikan World Peace Museum, and the Yokohama Overseas Migration Museum. We discovered that because the purpose of the Hiroshima Peace Memorial Museum is to memorialize the dropping of the atomic bombs in Hiroshima and Nagasaki there were no displays. However, at the Yokohama Overseas Migration Museum there is an entire section dedicated to “Japanese Overseas and their Families during WWII that is included as part of a long history of Japanese-Americans. As part of this research I have also learned the subtle nuances that the term “Japanese-American” carries . not just the technical definition of a race, but a matter of one’s personal identity and state of mind. I have also gained a sense of pride as a Japanese-American and discovered that we have our own heritage and own history. 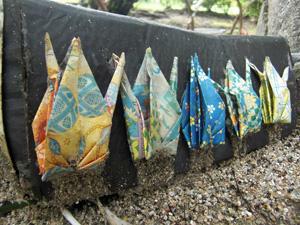