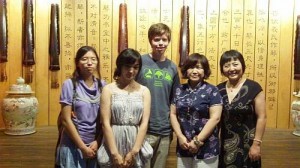 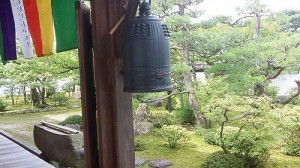 Our group spent ten days each in Kyoto, Seoul and Beijing to study temple music. In Kyoto we interviewed monks and nuns in four different temples and awoke each morning at 5:00 A.M. to listen to the live chanting. We learned about the history of Japanese temple music from a highly-respected professor at Kyoto Art University and went to a 300-year old temple where pastor and professor Nishimura and his wife presented a private service to show us how to chant and what instruments were played during temple services. We also had private concerts with shakuhachi masters and kabuki musicians and even jammed with them. In Seoul, we discovered the depth of respect that Korean monks and nuns have for Chinese culture and religion, and the determination they have to retain and promote temple music. Chinese temple music was introduced to Korea more than 800 years ago, and today Korean monks and nuns still practice it in its purest form. Our experience in China shocked the students because they discovered that the musicians at the Zhihua Temple were not monks but people from the countryside who present 15-minute shows four times a day. Tragically, this is a result of the destruction of temple complexes and persecution of monks during the Great Proletarian Cultural Revolution and the failure of Buddhists to revive these ancient traditions. The experiences of our group in these three countries has helped us discover the state of temple music throughout East Asia, and deepened our commitment to preserve these traditions through the performances of temple music by the Carleton Chinese Ensemble and by the efforts of Gao Hong to arrange the music for pipa and perform and record it. 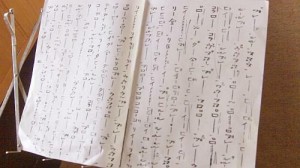 Our research began with us waking up dreadfully early in the morning to participate in the chanting ceremonies in Kyoto temples, talking to monks, learning about the history of Buddhist music, and seeing more temples and monks. We discovered that the style of notation for Buddhist chants is wonderfully exciting. One style consists of a curving, curling, rising, falling, and twisting line. It looks so artistic and daunting to read, and yet it makes so much sense. We were impressed by the sound. The full voice of the chanters was so powerful and beautiful. It definitely took years to culture such a voice. The melodies were especially soothing and captured you in a surreal way. During our studies in Kyoto and Seoul, Professor Gao informed us that we would be shocked when we listened to the music of Zhihua Temple in China. We weren’t quite certain what she meant. When we arrived at the temple, we paid twenty yuan for a ticket that allowed us to enter the dilapidated temple (which was more like a palace courtyard), and tourist signs informed us that the next performance would be from 3:00-3:15 P.M. We heard the sound of a sheng being warmed up in a nearby room and were excited, expecting something amazing. At performance time, a handful of men in yellow costumes came out to perform. Most looked dreary, and their music sounded just like their expressions: tired, forced, and not taken seriously. They played for exactly fifteen minutes and exited as quickly as they had come. We were stunned. After hearing from Professor Gao of the destruction of temples and the attacks on Buddhism in China during the Great Proletarian Cultural Revolution, we came to realize how fragile the arts and culture of the world are and how important it is to preserve the rich tradition of Chinese temple music. 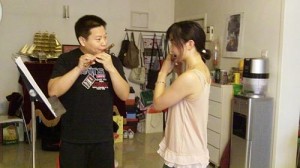 The difference in temple music was so striking that it is difficult to believe. It was nicely summed up by one Korean monk: “This style of music came from China to Korea and Japan. In Korea, it has mostly been preserved. In Japan they developed it so it became their own. In China, it has nearly been lost.” As a research team we were forced to confront the question of how one preserves tradition, and still keeps an open mind for new developments. One of the goals of my project is to help with the process of adapting the temple music we heard to enable the Carleton College Chinese Music Ensemble to perform it. A few difficulties come to mind: most music is either sung solo, or sung in unison, mostly on one note with occasional changes in pitch involving two or three other notes. To increase its variety, we can draw upon other rarer styles of Buddhist music that we have heard. We can change the mode as exemplified in western-style chanting with organ that we heard, or change the scene and mood by changing melodies, instrumentation and volume, as suggested by concert given by Korean nuns. We might even integrate melodies taken from shakuhachi music and Zhihua temple music. 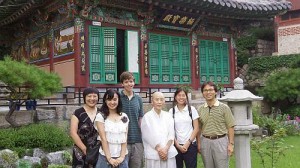 My research endeavors in Kyoto, Seoul and Beijing focused on ethnomusicology as I sought to discover the cultural influence of Japan, Korea and China on music and in addition catalogued Buddhist chant motifs. In Japan, I observed how the Japanese have adapted Chinese temple music to suit their own taste. In Korea, I noted the fierce determination of Korean to preserve the chants and musical traditions conveyed to them hundreds of years ago from China. In China, I saw how traditions have been ravaged by the Cultural Revolution. I am currently taking what I learned this past summer and applying it towards further research in Chinese music as part of a Watson Fellowship. From this research, I hope to complete a solid paper that will assist me as I seek entrance to graduate school to study ethnomusicology. I am also searching for the connections between the European chant music I studied in college and the chant music we collected. I am transcribing the chants we recorded and searching for motifs that occur within each country.