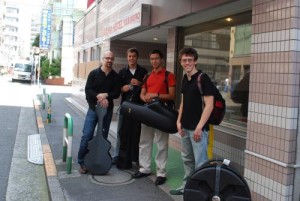 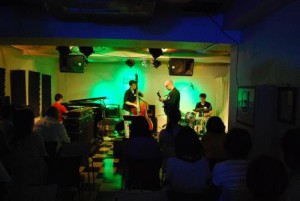 The research team from Hope College spent three weeks in July exploring the music, community, and culture of jazz in Japan. Jazz – an American art form that originated in the early 20th-century African-American community of New Orleans before spreading through America and continuing to develop to the present day – also has had a presence in Japan throughout most of the 20th century. We researched Tokyo jazz clubs and Japanese jazz musicians, attending jazz performances every day. We also had the opportunity to meet and play music with Japanese jazz-musician college students. We found an amazingly huge, thriving, and dynamic jazz scene, which surpasses even that of New York – the so-called “Jazz capital of the world.”

While Tokyo’s jazz scene is highly-developed and thriving, it is virtually unknown outside of Japan. One of our goals is to make information about this exciting scene available through a website which will feature descriptions of Tokyo’s jazz clubs (including directions on how to find them) and jazz musicians (with stylistic analysis, biographical information, and links to online recordings and videos). In addition, the student research team is composed of skilled jazz performers, and they will perform several concerts and record a CD featuring music composed by prominent Japanese jazz musicians. 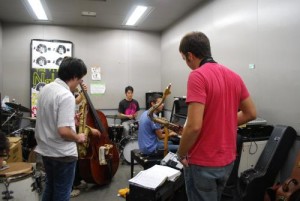 The greatest highlight of this research experience was in the many jazz performances we were able to attend. We visited jazz venues of all types across Tokyo and listened to a variety of different jazz subgenres. Among these, our night at the famous Pit Inn stands out as one of the best. Yosuke Yamashita and his quintet displayed their ability to move from quiet and restrained playing to high-energy, angular lines that had me on edge and expectant. Not only did these and other musicians show their great respect for the art, but, to our surprise, the audiences would also cheer, clap and even shout during their favorite moments of a piece. This devotion to jazz was truly inspiring. My time in Japan affected me by helping me to realize that jazz is being cared for and developed all over the world, encouraging me to continue to foster and develop jazz in my own life and in my community. 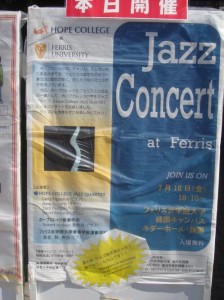 Our trip to Japan was an amazing experience. Though the purpose of the trip was to experience and study the jazz scene in Tokyo, we learned far more than we expected about the Japanese culture. There are many social practices that are far different than what is common in the United States. Yet despite these differences, as people we are very similar, and have the same emotions, hopes, and desires. What we experienced musically was nothing short of amazing. The clubs are as various as they are many, and there are a lot of them. Everywhere we went, we found high-quality music in a variety of styles. It was truly encouraging to see so many jazz venues with frequent shows. It illustrates the fact that working in Tokyo would be a viable option as a jazz musician. I hope to return there someday and participate in this jazz culture.

For me, this trip led to a huge expansion of my knowledge of the world jazz scene. Before we left, I was for the most part only aware of the scene in New York, and to be completely honest, I was fairly convinced that any music scene outside of New York would be of a lower quality, and certainly less active. In Tokyo, I found a scene that was not only as active, and in fact much more so, but also one that has a level of musicianship that exceeded my expectations, and in fact matched up favorably with the musicianship in New York. I also found a discerning and passionate jazz audience in Tokyo that proved that although we jazz musicians grow up with the resignation that our art form is dead, jazz is in fact very much alive and well in Tokyo. 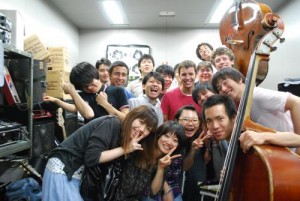 While in Japan we attended many jazz performances, most of which featured Japanese artists. We also performed on four occasions for two of Hope’s sister colleges and Hope alumni, as well as giving an impromptu concert organized with the help of some college students. Overall the trip dramatically changed the way I view Japanese and American culture, and vastly improved my understanding of jazz. It is an experience that will remain fresh and vivid in my mind for many years to come.