The Effects of Agrochemicals on Biodiversity in Cambodian Rice Paddies 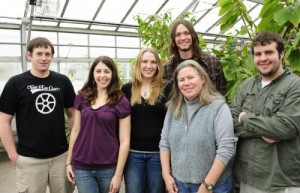 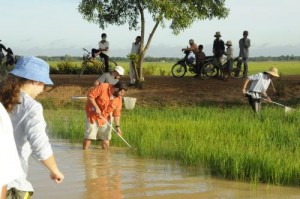 This joint study was to sample the insects, fish and frogs in several different types of rice paddies, near the small town of Kampong Thom in central Cambodia, to compare paddies managed traditionally (organic) with those that have been managed with the use of chemical fertilizers as well as paddies where pesticides are regularly employed. Besides the obvious environmental concerns of chemical use in agriculture, especially in a place where the fields are essentially ponds and where water can move easily back into rivers and lakes and spread contamination to other ecosystems, Cambodia has another reason to be concerned about the effects of agrochemicals. It has been estimated that up to 85% of the dietary protein of rural Cambodians comes directly from the animals living in cultivated rice paddies. Crickets and grasshoppers, the major taxa in our samples, are caught in great quantities at night and fried. Toads and frogs, fish, snakes, snails, and clams are all collected and used in family meals. We were able to sample the terrestrial and aquatic insects, as well as fish and frogs, in twenty paddies (five traditional, five that use chemical fertilizer, five that use some kind of pesticide, and five that are strictly monitored using certified organic methods to produce rice), and we have also collected water samples from all twenty paddies. All of our collected organisms have been returned to the University of Wisconsin-Eau Claire where we are now identifying the taxa of our insect and amphibian samples. Following the completion of data analysis, we will present our findings at a departmental seminar in November, followed by two poster presentations in our own academic community and at the spring ASIANetwork conference. We also expect to publish one or two academic journal articles based on this study. We are also pleased to report that we have just been notified that a proposal to return to re-sample our paddies near the end of the rainy season in December has just been funded by our university so three students from this study and two students new to the project will return to Cambodia to continue this work. 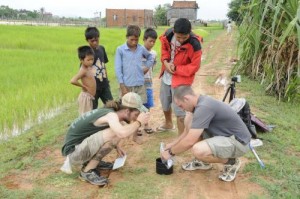 My contribution to this research was to take core samples of the soil in the rice paddies, but after several samples were taken, I found nothing living in the mainly clay-based benthic material. Consequently, it was decided as a group that my time would be better utilized by mapping the paddies accurately, calculating the area within the paddies, and breaking each paddy into five by five meter squares and recording the percentage of water coverage in the paddy. This summer, the traditional rains came almost a month late, which meant that many paddies were partially dry. The majority of paddies were of similar size, but water coverage in paddies varied. 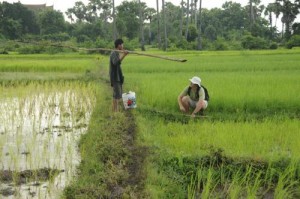 My charge in this project was to determine the variety and numbers of frogs in the rice paddies that we surveyed. The frogs in Cambodia seemed much more aware of danger and considerably faster than those one encounters in Wisconsin. Nonetheless, I managed to capture significant numbers of them, and I am currently trying to identify exactly how many different species of frogs I captured. Initially, both minnow traps and pitfall traps were used to capture frogs, but the minnow traps proved to be ineffective. We used aquatic nets, pitfall traps, and hand-catching methods to be as thorough as possible. 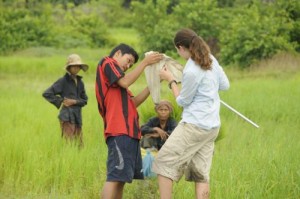 My charge was to obtain fish samples in the rice paddies. The most significant challenge I faced was related to the lateness of the rainy season. Because many of the paddies had only been wet for a short period of time, fish had not had much time to populate the area. Our research method of trapping fish only proved viable when a paddy had inlet or outlet flows of water, and because all paddies did not have flowage, we had to abandon this method. Active sampling was therefore done with an aquatic net. Another complication was that given this was early season, and rains had come late, fish size was small, less than 10 cm long, which made it difficult to identify different species. In the end, we were able to identify only four distinct species. 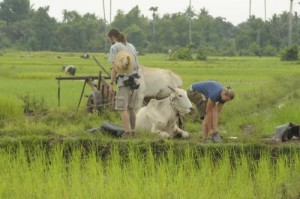 My sampling of aquatic insect life in the twenty paddies we analyzed in Cambodia was quite productive. Captured insects are preserved in alcohol and have been brought back to Wisconsin where I am currently working to identify them. This data will be combined with sweep-net data to give us diversity index values for the different types of paddies sampled. 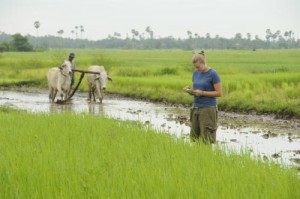 During our time working in the rice paddies, I was responsible for collecting and sorting the insects living in the emergent vegetation of the paddies into their taxa. I collected insects by moving through each day.s paddies early in the morning, armed with an insect net and glass jars. Afterwards, I sorted the insects into broad taxonomic groups, order or family, until I could get back to our labs in Wisconsin to do more detailed classifications. The result was an enormous variety of terrestrial insects. Our whole group is currently involved in examining and identifying our invertebrate collection.