Japan’s Youth:
Disaster and Rebuilding for a Common Future 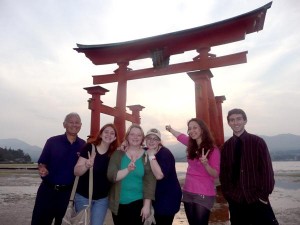 On March 11, 2011 Japan experienced its biggest disaster since World War II. The compound devastation of the earthquake, the tsunami and the continuing nuclear power plant problems has the potential to affect Japan and its future: its economy and politics, its psychology, and its way of life. The aim of Webster University’s project, “Japan’s Youth: Disaster and Rebuilding for a Common Future,” is to examine how Japanese young adults view their role in the future of Japan in light of the issues raised by the March 11 disasters and their aftermath. The study involved participant-observation in seminars, university class discussions and press conferences focused upon each individual research member’s specific area of study: media coverage, the government’s role, nuclear power, discrimination, and young adults’ self concepts. The study was conducted in the Greater Tokyo area, the Kansai region (Osaka, Kyoto and Kobe), and in Hiroshima. Data show that young adults from all regions held similar viewpoints but a wide variety of responses to the disaster are evident: 1) From naïve, uninformed and unquestioned acceptance of mainstream media and government statements to critical evaluation of prevailing information; 2) from indifferent, disengaged and passive attitudes to passionate, engaged and activist attitudes, 3) from a self-absorbed, individualistic scope of concern to a widening (community, national, global) scope of concern, empathy and engagement; and 4) from minimal to greater self-awareness and metacognitive (self-reflective) abilities. The study, conducted in the timeframe of ten to twelve weeks following March 11th, represents a freeze-frame time snapshot in the unfolding process of Japan’s handling of this disaster and its repercussions. 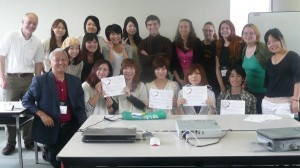 My role in this joint research project is to examine the role of the Japanese media in covering the March 11th disaster and subsequent developments, and more importantly to discern what the views of young Japanese adults are about this coverage. The centrality of the media in covering such events is readily apparent. However, my objective is to discover whether or not the Japanese people, in the immediate aftermath of this disaster, feel that coverage was accurate. Preliminary findings suggest that about half the young adult population who filled out our questionnaires and who we interviewed and observed feel that media coverage has been accurate. Nonetheless, many have asked foreigners about non-Japanese coverage of the events and discovered that there are surprising differences. The other half of these young people feel that media coverage has not been complete, accurate and unbiased. 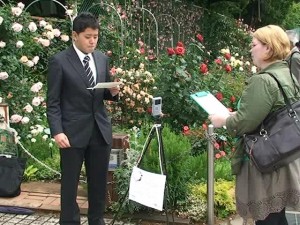 The original assumption of many is that young Japanese have little concern about anything in the world other than what is happening in Japan or uchi-muki. We discovered that this is an outdated term. Nonetheless, my charge in this research group was to discern how Japanese youth view their role in Japan’s future. I quickly discovered that young adults are filled with a range of pride, passion, care, and hope for Japan’s future, but also exhibit some despair and anger as well. Young adults in the Tokyo area gave more emotional responses than those in the Kansai region when asked whether they are willing to change their lifestyles to help those in need or become involved in service projects to help in a relief effort for disaster victims. Some announced that the March 11th disasters have led them to more seriously think about what it means to be Japanese. 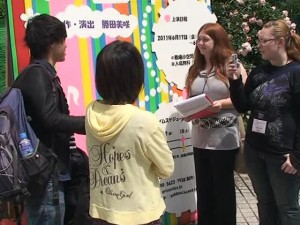 My role in this joint project is to evaluate the role of government in responding to these disasters and the young adult perception of how this has been carried out. All recognize the role Japanese government has played in conducting recovery and restoration efforts in the past. However, the triple disaster of March 11, 2011 placed monumental strains on Japan’s government. We interviewed students in Tokyo, Osaka, Kyoto and Hiroshima and also met with them in classroom settings at some universities to discuss these events and study their views. Preliminary findings indicate that, for the most part, students are not pleased with the response of Japan’s government to this crisis. However, they recognize that the formulation of their views is complicated by their distrust of media coverage of these events. 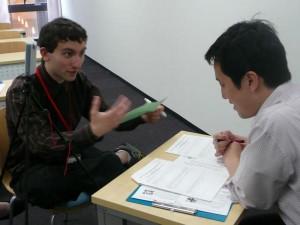 My research focuses on the problems at the Fukushima nuclear power plant and what Japanese feel should be done vis-à-vis nuclear power in the future. We asked: “Do you think Japan’s nuclear power plants should be phased out or closed?” Through many forms of data collection at a wide range of locations throughout Japan, we are able to discern that opinions of students from the Kansai region and those from the Kanto region differ slightly. As you might expect given the closer proximity of Tokyo to Fukushima, students from the Kanto had more negative and stronger feelings about nuclear power. One student in the Kansai region observed that they were less affected by the disaster and many adopt an “out of sight, out of mind” attitude towards it. It is clear that many responders had little understanding or knowledge of how nuclear power works, yet it is safe to say that a significant number of Japanese want nuclear power to be gradually abolished.

The March 11th disaster, which so devastated the land and people of Japan, also had a profound effect on the social and political climate in the country. Japanese citizens are more eager to organize, to speak out, and to work for change in the country. One thread of concern expressed by young adults in Japan is to clearly state that steps must be taken to prevent discrimination against the victims of radiation-poisoning due to the meltdown at the Fukushima Daiichi nuclear power plant. Though this positive step has been taken, it is less clear how this can be accomplished, but one step is agreed upon. The Japanese government must take the lead in designing public health and education programs to better inform the public and to help prevent discrimination against victims.