In Limbo: Governing Vulnerable and Displaced Populations in Thailand 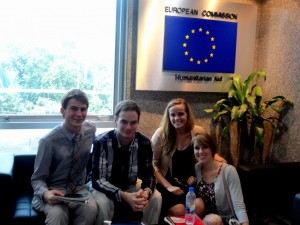 In Thailand, the international community is confronted by one of the most protracted and complicated migration crises in the world. By examining this complex issue from the vantage point of a variety of stakeholders – the Royal Thai Government (RTG), United Nations High Commissioner for Refugees (UNHCR) and other international organizations, non-governmental organizations (NGOs), community-based organizations (CBOs), and donor governments (e.g. the United States) – our project aims to illuminate the divergent, at times contradictory, incentives that undermine cooperative efforts to provide “durable solutions.” In doing so, we seek to show how the interplay between the involved stakeholders and their competing political interests affect their collective ability to govern and protect Burmese refugees in Thailand. The study occurs against the fascinating backdrop that was not anticipated caused by recent political reform in Burma and the election of Aang San Suu Kyi which is being treated by most stakeholders as a potential game changer. The preliminary findings are threefold. First, these vulnerable populations – refugees, migrants, or trafficking victims – each exist in their own state of limbo. So-called “push-pull” factors (unfavorable conditions where populations reside or the lure of another area, often in terms of economic potential) and the murky legal status of these populations severely complicates efforts to provide basic protections and assistance. Second, the vulnerable and displaced populations aren’t the only ones in a state of limbo, as each stakeholder in this case operates and interacts in what we call “layers of limbo.” Finally, these layers are providing serious obstacles toward the creation of a “durable solution” to the Burmese migration crisis.

The abstracts of each researcher allow the reader to gauge the direction of each student’s research. Throughout this academic year the threads of research will be further deepened resulting in final papers being submitted by each student as part of their senior theses submitted for graduation at Linfield College.

My research concentrates on the unconventional role of the United Nations High Commissioner for Refugees (UNHCR) in Thailand. As the largest refugee agency in the world, the UNHCR is typically allocated a considerable amount of authority in refugee crisis. However, given that Thailand is a non-signatory of the 1951 Refugee Convention, the UNHCR has been forced to take a limited backseat role. While conducting research in Thailand, I asked three primary questions: First, how is the UNHCR’s role in Thailand different than in countries that have signed the Refugee Convention. Second, how is the UNHCR’s ability to assist refugees in Thailand limited? Third, is the UNHCR’s backseat role in Thailand only applicable to Thailand, or might this be a model that can be applied elsewhere. I believe that the limitations placed on the role the UNHCR plays in Thailand has significantly empowered non-governmental organizations (NGOs) who are better equipped to assist Thailand’s refugee population and are better accepted by them. My final research paper will draw from the broader academic literature on this subject, highlight criticisms of the UNHCR, and show how NGOs in Thailand are doing a better job than the UNHCR to meet the needs of refugees.

My research focuses upon the role of the camp management system in Thailand’s refugee camps, and the ability of capacity building programs to facilitate successful repatriation into Burma when the time becomes feasible. The UNHCR is not the leading authority in the countries refugee camps. Rather, a conglomerate of NGOs oversees and manages the nine camps along the Thai-Burma border. These NGOs have developed a longstanding trust with the refugee population which enables them to orchestrate a camp management system which includes vocational training, formalized education, and livelihood programs. Refugees develop their own capacities to lead and govern the camps themselves which gives them a sense of normalcy and dignity. The refugees establish their own judicial system, code of conduct committee, boarding house committee, new arrival committee, and manage the distribution of food and much more. NGOs argue that while the UNHCR and some other donors want to control resources, it is not in the long term interests of the refugee population for them to do this.

My research considers the factors that cause the Burmese refugee crisis in Thailand to remain in a state of limbo. This state is caused by Burmese fleeing their country due to push factors (those coming from inside Burma which include military aggression and the lack of infrastructure development) and pull factors (those coming from inside Thailand such as the promise of increased economic prosperity and a prospect of finding a safe haven). Once in Thailand, the refugees face three possible solutions to their refugee status, all somewhat implausible, which leave them in a state of limbo. They are, first, local integration into Thailand, which the Royal Thai Government states will never happen; second, resettlement to another country, which since 2005, when the UNHCR no longer allowed those fleeing Burma to be registered as refugees, no longer became a viable solution; and third, voluntary repatriation back to one’s homeland, which until only recently seemed an unlikely solution as well. The agencies seeking to manage this crisis also seem caught in limbo. Non-Governmental Organizations (NGOs) and Community-Based Organizations (CBOs) are stuck between donor demands and their own humanitarian goals while attempting to retain donor support in a rapidly changing political environment. Donor governments are in limbo as they seek to determine whether or not to continue funding Thai-based NGOs, given their limited success, or to shift their investment to promising developments in Burma that might encourage repatriation. The UN has been consigned to limbo given the lesser role it is allowed to play in Thailand by the Thai government.

My research is focused upon recent development initiatives, funded by foreign investment, in Burma. It suggests that revenues from the limited investment that has occurred during the past twenty-five years, is often funneled by the Burmese government to the military which has used these resources to expand its activities against the country’s ethnic minorities. This has led to both internal and external displacement – an issue which presents both a human rights and security challenge in Southeast Asia. The study scrutinizes the neo-liberal development model and questions the recent lifting of Western economic sanctions. It suggests that since Burma lacks good governance mechanisms to manage foreign based investment, sustainable economic growth and poverty reduction do not inevitably occur as a result of development. For example, many refugee experts associate the origin of the current Burmese refugee crisis to a 1988 timber extraction deal with Thailand that had the effect of driving minorities out of their homelands and across the border into Thailand. I plan to explore the implications of Thai and Chinese investment in natural gas, and China’s funding of the construction of a strategically important gas pipeline (the Shwe project), which will run from Yunnan Province in China to the deep water port of Kyaukphyu in the Bay of Bengal, on the Burmese population. One might also study the impact of China’s Longjian and Ewati dams on Burma, and Chinese-led platinum and jade mining in the eastern Shan State on people in these regions. Foreign funded development projects continue to spark conflict and to enrich what is widely considered to be a corrupt and totalitarian Burmese government, but too often at the expense of local citizens.