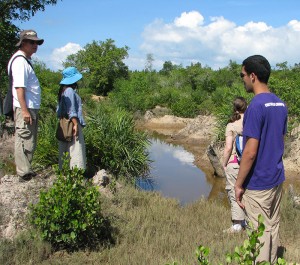 Our group from Marietta College conducted research related to the impact of unsustainable shrimp farming on Thailand. The studies are wide ranging and include analysis of the exploitation of laborers in the shrimp industry, varying views of the industry held by Thai Buddhists and Thai Musims living in close proximity to shrimp production areas, Thai government oversight of the industry, and the impact of shrimp agriculture on valuable mangrove forests in Thailand’s coastal waters.

My research is focused primarily on the Thai shrimp industry and its impact on workers involved in the business and the local environment. I was able to conduct fourteen extended oral interviews with managers and workers in the industry and local officials in areas where shrimp production occurs. I also completed seventy surveys in villages near shrimp production sites. As I continue my research on this topic, it is already apparent that for the most part the industry exploits those working within it, especially when hiring Burmese or Laotian workers who are paid less than half the wages of their Thai counterparts. One also discovers that local officials and those in villages nearby often have little understanding of the detrimental effects the industry is having on the environment. 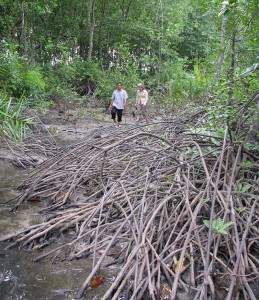 My research focused on how religion, more specifically Thai Buddhist and Thai Muslim faiths, view nature and concepts of conservation as evidenced in their opinions about shrimp farming near their coastal Thai villages, and my awareness that industrial shrimp farming often destroys mangrove forests upon which many of these villagers depend. Our research included a kayaking tour of the mangroves and home stays in the village on Ban Talae Nok where villagers use the resources from the mangroves daily. I quickly discovered that villagers use the resources around them, never in excess, and wasted nothing. However, much to my surprise, both Buddhist and Muslim leaders expressed little concern about the degradation of mangroves and the environment caused by the shrimp industry. Most villagers remain uninformed and are not interested in confronting the shrimp industry to reverse its adverse environmental impact on the region. 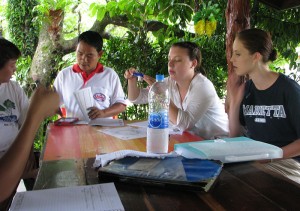 My research will focus on three ultimate objectives: 1) providing an accurate picture of what the global shrimp market looks like and how it operates, 2) determining how quickly shrimp farmers are developing sustainable shrimping practices, and 3) ascertaining what policies will most quickly advance sustainable practices in this very competitive industry. While in Thailand, numerous individuals were interviewed including shrimp farmers and workers in the industry as well as officers in the Thai Department of Fisheries. While the Thai government actively monitors and invests in the shrimp industry, it is clear that, for the most part, it is somewhat laissez faire in its dealings with it. If the industry is going to move rapidly towards developing a sustainable base, it is clear that the government must play a more active role in encouraging this to happen through conducting more research on shrimp production, providing better education on best practices to shrimp farmers, and perhaps presenting monetary incentives to them to help them transition to more sustainable practices. 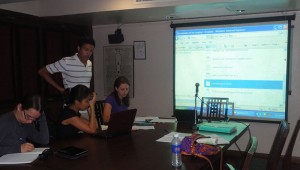 My research dealt with mangrove reforestation in areas where shrimp farms have been abandoned in the coastal regions of Thailand. I worked in four site locations, two near the small town of Ban Talae Nok on the Andaman coast of Thailand, and two near the Kung Krabaen Bay Royal Development Center on the Gulf of Thailand. One site is an abandoned shrimp pond which is reverting back to mangrove, the other is a more natural mangrove stand that is growing back from a timber harvest, the third is a more natural mangrove area, and the fourth is a dense stand of Rhizophora mucronata that was replanted several years ago. In each area, I collected soil samples, meiofauna samples, and transect data including densitometer readings, plant density, and plant diversity. This data will be used to compare regrowth at each of the sites.