Hetou: A Northern Chinese Village in the Process of Urbanization 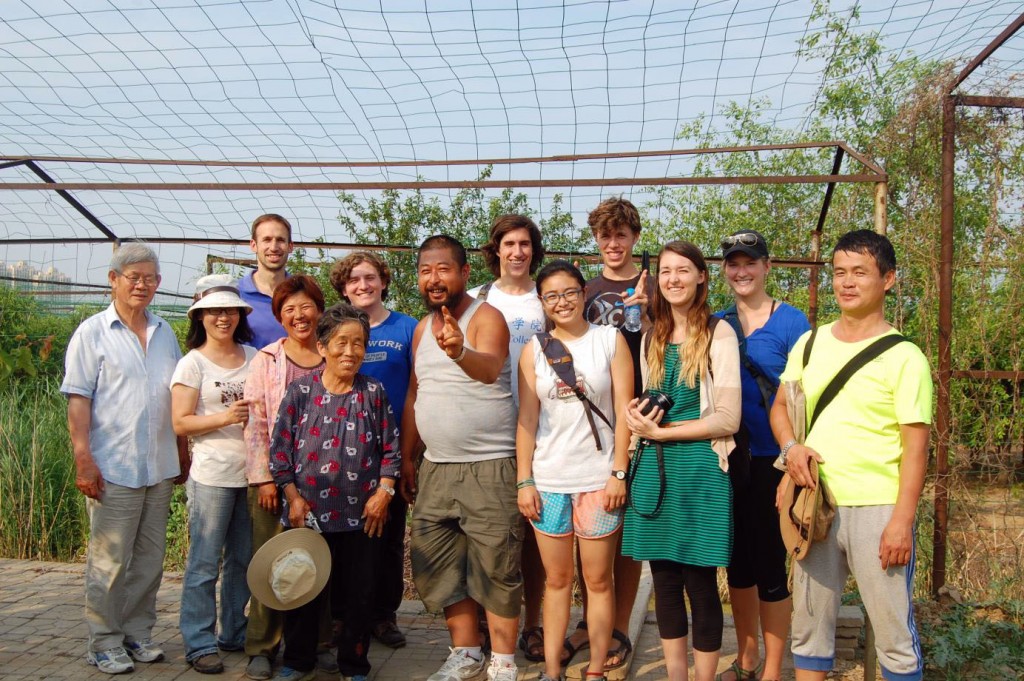 Luther students and faculty visit farmers in Hetou in their jujube tree farm.

A dual-mentored team with six students from Luther College has successfully completed their research trip in China, exploring the process of urbanization in Hetou, a suburban village in Tianjin. Their research focused on the interaction between economic, social, and environmental interests in the process of urbanization in Hetou. By researching topics including urban planning, pollution, migrant workers, and education, the team examined how urbanization has changed an agriculture-based community. The engagement of migrant workers, villagers, and local leaders has been central to the research project. Students were able to interview 16 families and groups, and took many site visits such as the jujube farmland, the Northeast Tilt Market, the Eco-city, Jinwan Plaza, and the Qiaoyuan Park. They learned how to employ qualitative research methods to address both the advantages and disadvantages of the ongoing urbanization project in Hetou. They also got a chance to travel to Beijing and Shanghai, one north and the other south, which provides a more comprehensive picture of China’s rapid development and the problems lying behind.

Travis Houle
Given the prominence of China on the world stage and the large host of environmental, economic, and social changes occurring in the country, experiencing the nation first hand provided me with a greater understanding of a nation central to the planet’s future. Fostering a deeper understanding of the costs and benefits of urbanization in China, this program allowed me to think more critically about the process of urbanization in China and other developing nations. As I begin a career in environmental science, I plan to apply this understanding to research, education, and action with a better understanding of current environmental issues globally, which would be incomplete if one were to omit the situation in and influence of China.

Through a series of qualitative interviews and observations, our research team was able to understand the progression of urbanization within Hetou, a small village on the edge of Tianjin. Focusing on the relationship between people and urban space, we found that as time progressed more space was available for exercise and community interaction, despite moving into apartment complexes. Respondents clearly expressed satisfaction with urbanization and the benefits that it brings. Despite recognizing many of the environmental costs, respondents explained they were powerless to influence the government on such issues. Given that buildings are built cheaply and quickly, and that much of the common space is not cared for by the community, further research will be required in order to understand how urbanization will affect communities going forward.

John Rosenwinkel
Much of my time in China was spent analyzing the urban layout of the city, and examining the way people interact with that layout. Contrasting and comparing the Chinese cities to other cities I’ve been in around the world led me to question what space is needed to create happiness in one’s life. While lacking maintained and designated public space, the social dynamics of Chinese cities are unlike anything in Western societies. As I look to a future in city planning, I will remember my experience in China as a challenge to my preconceptions about what makes a city a pleasant place to live. Social interaction with neighbors and family is a large part of people’s happiness in China, while the matter holds less weight in U.S. cities.

Hetou is a village on the outskirts of Tianjin, near the Binhai New Area. While once a small rural village of farmers, Hetou today is a crowded village nearly engulfed by the city of Tianjin. For years there have been rumors of moving the locals of the village into high-rise developments. Through a series of interviews, we learned that most citizens were excited about the new possibilities of living in a modern, urban setting. However, not everyone living in Hetou would benefit from this migration. The continued skepticism and uncertainty behind the rumors of relocation have also hindered any growth or maintenance of the village today. Despite this, social connections remain strong between community members.

Sophia Ristau
It is quite difficult to try to begin to explain the experiences I had in China to a person who has never visited. Although I grew up in a metropolis, nothing could have prepared me for understanding China until I got there. As an environmental studies student, this experience has reshaped my worldview on what the goals of sustainability should be. China holds such weight on the rest of the world, not only because of its massive population but also its capacity to produce the world’s goods. Because of this understanding I now see just why environmental policy on a national or global level is so important when looking towards the future.

While in China, our research group did a total of 14 interviews, each lasting about one hour. Through this qualitative research we were able to gain many valuable insights on how the residents of Hetou felt about urbanization and additionally, opinions on urbanization as a whole in China. We found that contrary to our preconceived notions, many of the residents of Hetou welcomed the changes that urbanization would bring and did not feel they would lose the sense of community with the shift towards urbanization. We interviewed members of Hetou who lived in apartments within Hetou, members living in hutongs, people living in the new western village, migrant workers, and people living in the nearby Eco-City.

James Foster
My experience researching in China this summer was an eye-opening one as I delved into questions I did not have to time to explore while studying in Hangzhou the previous year. This opportunity has helped me recognize that societal issues are rarely the result of a single cause nor can they be solved with one elegant solution. More specifically this research trip taught me a great deal about the effect of government policy on the day-to-day lives of Chinese citizens especially within the migrant worker community. Finally this experience has helped me completely commit to the decision to move to China after I graduate college.

So far my findings have been inconclusive but fascinating. I have a much broader understanding of many housing-related concepts and terms as they are defined by the Chinese government, but this pales in comparison with the sheer depth of the relevant topics to be pursued around this issue. If I were to plan a second trip to China to further research migrant workers and housing, I would most likely visit a different city to ensure a wide data pool. Additionally I might want to research an area where the urban development is in the hands of an independent contracting corporation as opposed to direct control by the regional government. I have only come across the edge of a very complex issue.

Rachel Johnson
Up until this point in my life, this trip has been the most educational and interesting way I’ve learned about another country. I think to really grasp an understanding of a foreign culture one must live there for a period of time and fully immerse themselves in the world around them to get the full experience. I was lucky enough to do that, and really enjoyed traveling around to big cities like Beijing, Shanghai, and Tianjin to see the different parts of China and experience a country that seems to be changing overnight. The cities were spectacular, the food was delicious, and all the people I interacted with were wonderful and open to welcoming strangers into their culture. One of my favorite places that included all the above was where we stayed on the university campus, and I got to encounter and witness the harmony between the river and the city. It’s similar to Central Park in New York, but because it was a body of water I thought it to be even more awesome. I benefited most on this trip by becoming more open minded to foreign cultures, and a more well-rounded and intellectual person. As a psychology major, being able to participate in in-depth interview based research was the most valuable experience one could ask for.

Initially, I had the intention of learning about the air and water pollution in Hetou, and how it affected the village and how they were handling it. Information I gathered was that many villagers have a strong dislike of the air pollution but feel helpless to do anything. There used to be a lot bigger problem of water quality but it has improved, and now the concern with water is just the bacteria in it. After some interviews I started moving away from solely environmental factors, and leaning towards learning more about urbanization. It was very interesting discovering the Hukou system, which delegates the Chinese people to either a rural or urban citizenship, and is a main motivator to urbanize, besides living conditions. Those who are rural citizens don’t receive any health, educational, or welfare benefits, whereas their urban counterparts get all the benefits. There have been talks about urbanization in Hetou for years, but as yet little action has been taken. This leaves a very unclean living situation for the villagers in regards to trash and the cleaning of streets, because if people in the town could be moving at any time, not many put in any effort to maintain the appearance.

Katie Fillmore
In my opinion, it is important to understand education not as an independent problem, but rather in a holistic way, as something that is intimately connected to other social factors. This concept is true of both American education and Chinese education. In the case of China, throughout the process of this research, education became something that I increasingly viewed as a function of urbanization, rather than a consequence of it. Oftentimes interviewees would cite that their main reason for wanting urbanization was because they wanted better education for their children. In other words, people wish to move into the cities because of education. The aim of this research was not to define and evaluate the Chinese educational system as “good” or “bad”, or “superior” or “inferior” to American education, nor even to attempt to provide a solution.I Instead, what this research has done was to help me understand people’s perspectives toward Chinese education, as well as their perspectives toward urbanization and the environment. Rather than going into depth on the politics and regulations that drive the system, I instead focused my interviews on personal family situations and how they relate to the overall picture. I had a wonderful experience meeting the people of Hetou. I have learned a great deal through this research, and am excited to someday return to China. In the future, I hope to draw on what I’ve learned in Hetou in academic research and a career in teaching.

One major finding that I can draw from this research is the idea of uncertainty. As one interviewee described it, “Rules are complex and always changing. We don’t know what will happen because the government doesn’t know what will happen.” The uncertainty that the residents of Hetou feel is rooted in the vague wording of policies and the constant policy changes, leaving them in a kind of legal-limbo guessing-game. This mindset has major implications for massive-scale urbanization and environmental projects. As I talked with some of our interviewees, I learned that their attitudes of uncertainty in urbanization as a whole are somewhat reflected in their attitudes toward education. While I acknowledge that education is an important function of urbanization, it must be accompanied by other incentives. This confirms in me the idea that education is intimately connected to other social factors. It is neither an independent problem, nor is it an independent incentive.