Ancient Music in a Globalized World:
Documentation of Nanyin Preservation in Quanzhou, Fujian

This project aims to document how people in Quanzhou are preserving and sharing their cultural and musical traditions of the living and partially orally-transmitted nanyin art form. Students will document the struggles and successes that nanyin performers have encountered in the preservation process. They also hope to raise awareness of nanyin globally as a model for other declining musical traditions throughout Asia and the rest of the world.

The students will interview and discuss with educators and students at the Quanzhou Art School on how nanyin is being preserved in Fujian and the rest of China. They will meet with the established, professional nanyin group Quanzhou Nanyin Orchestra to research what efforts are being made to promote nanyin music through the orchestra’s recruitment and promotion processes; and with an amateur nanyin troupe to document that side of preservation. Additionally, the team will interview students and faculty at the Central Conservatory of Music in Beijing to gauge how the broader community of Chinese musicians view nanyin conservation. The team will communicate again with their Asian friends after returning to the United States and developing a website, in an effort to share all material produced.

Exchanges will be conducted in Mandarin Chinese, which will give valuable language experience especially to the two students who are not native speakers. Interpersonal and cross-cultural communication skills will be honed through interviewing, listening to, and discussing complex issues with people of varied backgrounds. Through the process of synthesizing the information gathered, the students will utilize and improve their critical thinking and analytical abilities, scrutinizing data related to the complex and multifaceted issue of music and culture preservation. The students will improve their musicality through instruction in nanyin, primarily taught orally, contributing to development of music-listening and transcription skills with overall improvement in an ability to hear and approach music.

Preparing for and performing a multimedia concert upon return to the U.S. will aid in mastery of digital tools and give opportunity to practice effective public presentations. Completing research on nanyin and cultural preservation before travelling to China and synthesizing information into presentations following the trip will prepare the students for future research projects involving field work in Asia, as will the experience of navigating a region of China where the local dialect and culture are unfamiliar. Footage of interviews, recordings of nanyin music, and transcriptions into staff and cipher notation, that will be preserved and shared via a website – will serve as resources for students to use in future applications to graduate school and jobs, and as a foundation for future research in culture preservation or endangered local musical genres. Presenting at the ASIANetwork conference will expose the students to the workings of academic conferences and prepare them to attend other such conferences in the future.

Nanyin, a musical genre local to Minnan in China’s Fujian province with a history stretching back hundreds of years (and perhaps much longer), has experienced a decline in participation and practice over the course of the 20 th and 21 st centuries. Our project sought to investigate the current state of nanyin preservation in Quanzhou, Minnan: Which strategies were being employed? Which weren’t? What were the successes experienced by musicians and scholars? What were the failures? Where was nanyin going? Where should it be going? 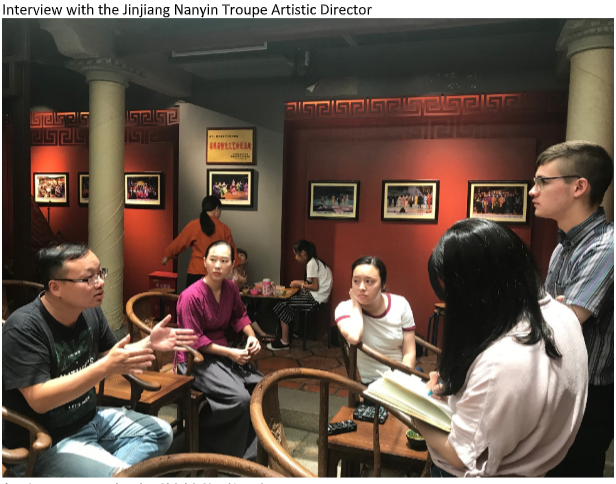 We learned about changes in transmission strategies employed in Minnan, the interaction between traditional and institutional education and between amateur and professional organizations. We learned about new compositions fusing nanyin with other musical and dramatic genres and the reaction to these compositions from amateur tradition-bearers, and about how nanyin performances are now being performed for paying audiences, a phenomenon which was traditionally previously prohibited. Nanyin practice in the 21 st century is increasingly complex, involving a variety of perspectives and conflicting professional and amateur performers, researchers, students, educators, and composers. Many, however, believe that the innovation that has come with institutionalization and commercialization is not sufficient to replace traditional transmission, and can only supplement, and not replace, traditional teaching and performance. Further, scholars are concerned that the increase in new performance practices has the potential to threaten the survival of traditional repertoire and culture. However, appropriation of new technology has allowed for some innovations that have the potential to support traditional transmission strategies.

Completion of our project involved close communication with local contacts; and improving our interpersonal, oral, written, and cross-cultural communication skills in addition to Chinese language ability. As ethnomusicological work, our project constituted a wide range of experiences crucial to my future career in Chinese ethnomusicology, preparing me for future educational and professional opportunities in Minnan and elsewhere through networking, writing practice, and on-location fieldwork experience. The information and perspectives gained from our interviews and discussions have been collected and presented at a multimedia concert at Carleton College, at the ASIANetwork conference, and will be published through a website in English and Mandarin Chinese.

During our team’s interviews with nanyin troupes, scholars, and educators, we discussed topics ranging from culture and history to commercialization and adaptation. One of the recurrent themes was the decline in nanyin participation. Therefore, nanyin practitioners are using technology to appeal to the younger generation by creating a booklet of QR codes, which are ubiquitous in China, so that people can easily access nanyin pieces and recordings. This showcases the efforts of traditional nanyin practice adapting to a changing Chinese society and addresses one of the SFF Core Ideas, specifically how current global issues fit in an Asian context.

Being part of the SFF program boosted my confidence and familiarity in regards to conducting an effective research project. This project taught me how to locate germane literature, formulate specific methods, and synthesize results into cogent conclusions. I orally presented these findings
during our team’s multimedia concert at Carleton College on February 24, 2019. Since I am interested in pursuing a career in the sciences, the process of figuring out project methods and presenting in public are important in conducting any kind of research. Being able to have this research experience in a non-science field is advantageous because I am able to look at a topic from a different perspective.

The practical and professional skills that I gained during this project, such as interpersonal communication, will provide me with a solid foundation in the workplace. I facilitated discussions with the organizations we met with on important topics, such as economy, education, and gender. The ability to have meaningful and productive conversations with people in various contexts fosters greater teamwork and collaboration. In addition, the experiences I gained from the SFF project increased my global awareness. I interacted with different groups and cultures first-hand, which allowed me to discover the differences, but much of the time the similarities we had. I am forever grateful for the opportunity ASIANetwork’s SFF Program has given me.

Coming back from China, the student researchers have met several times to listen again to the recordings of interviews and collect information. After we rearranged all the information, we held a multimedia presentation during the concert presented by Carleton Chinese Music. This was a presentation with slide show and videos to tell the audience basic knowledge about Nanyin and what we have done during our trip in China; then Tangsong ensemble presented a piece called Meihuacao, which is originated from Nanyin. With the vast amount of information, we created a poster for the conference in April. From the process of research, we have all improved our ability to search useful information, do an effective interview, collect the information we need, and present to the audience without the cultural background. Individually, I have improved my photography skills and have learned to post attractive and useful information online. The research not only helps the audience in the US know about a form of traditional Chinese music, but also gives more support to the Nanyin artists and scholars in that people all around the world know more about Nanyin and that what they have done is very meaningful. 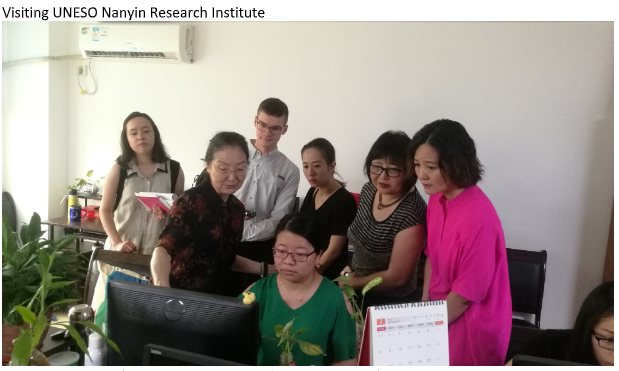