North Korean defectors share common issues and challenges with refugees in other countries; however, historical circumstances have created unusual aspects applicable only to them. One particular difficulty for North Korean refugees adjusting to South Korean society is the prevailing belief that since South and North Koreans share common ancestry and cultural heritage, they should adjust more quickly and easily to their new circumstances. Decades of ideological propaganda and a virtual block on communication between the two populations have created a wide gap in lifestyle, values, sensibilities, and even language. North Korean refugees have encountered all sorts of barriers in South Korea, a land they previously considered part of their motherland. In many ways, the culture shock they experience when finally encountering real people and real life in South Korea is worse than expected, simply because they do not anticipate it. North Korean refugees are often frustrated because South Koreans treat them as newcomers, eternal outsiders, and occasionally as potential spies maliciously determined to undermine South Korean society’s stability and prosperity.

While in South Korea, we will work closely with faculty and students from the Department of North Korean Studies at Ewha Women’s University (our exchange college in South Korea). We will visit the Ministry of Unification, various alternative schools for North Korean refugees, and NGO administrative offices. Students will hone a number of important skills in conducting field research, analyzing data, and disseminating their findings via formal research papers and reports, video and social media content, and public presentations to other students, civic organizations, and the local community. Students will also present at academic conferences (ASIANetwork annual conference 2019) not only to share information but also to gain confidence in their public speaking abilities. 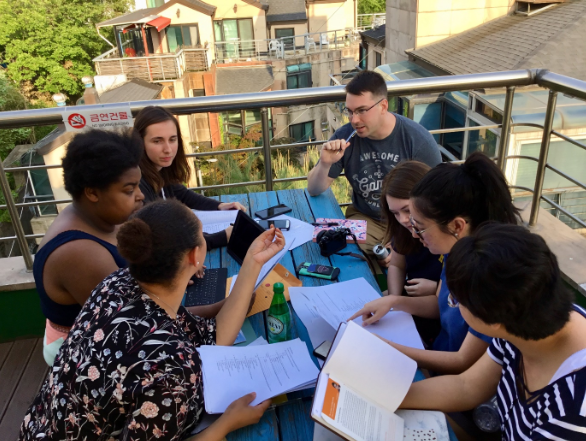 Roanoke College students strategize the most efficient and effective way to process the results from the surveys we administered to 102 South Korean college students.

North Korean defectors resettling in South Korea face a variety of challenges ranging from culture shock, language barrier, technological hurdles, and an overall embarrassment about their past and identity. This study was conducted to examine the difficulties North Koreans face resettling into South Korea society and showcase the institutions and outside factors that can affect positive change in the assimilation process. This paper looks at how Non-Governmental Organizations (NGOs) help combat said challenges of defectors and if their work affects South Koreans’ perceptions of the North and its people. Interviews were conducted with the personnel of two NGOs, Teach North Korean Refugees (TNKR) and Liberty in North Korea (LiNK), as well as with North Korean defectors associated with various institutions. Interview data reveals that the perceptions a majority of South Koreans have as to what a North Korean is like impacts how North Koreans feel about the security of their place within their new “motherland.” The main case study, TNKR, provides English lessons to North Koreans in order to help with the language barrier faced in a globalized society, as well as give North Koreans confidence to go out into South Korean society and change perceptions about how others view them on their own terms. LiNK’s focus was on building a community for defectors to return to, as well as changing South Koreans’ perceptions of defectors as potential political threats to refugees in need of humanitarian aid through the creation of documentaries and online videos. NGOs are essential to insuring that North Koreans settle comfortably and successfully into South Korean society in the long-term. 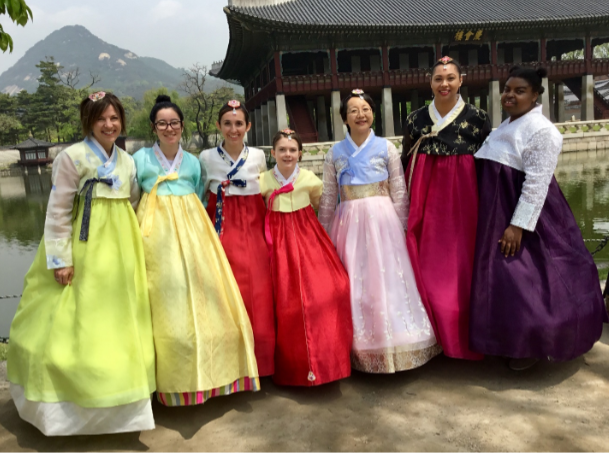 After several days intensive interviewing, we rented hanboks (traditional Korean dress) and posed in front of the Gyeongbok Palace.

Recent events in East Asia have made headlines around the world, many focusing on the current possibility of North Korea’s denuclearization. Over the years, South Korean popular culture has offered insight as to how the country views their northern neighbor. This project is an exploratory approach to understanding how South Koreans view North Koreans living in South Korea, and how these views are reflected or portrayed in recent films. Such an understanding potentially provides valuable cultural and political information on the relations between the two countries, and what course of action is most viable for a more cooperative future. When examining recent films released in South Korea that depict North Koreans, a general theme emerges: North Korean male spies, while capable of honor and fear, are still in need of patriarchal guidance from their South Korean counterparts. This popular image of North Korean spies and political espionage permeates media, and interesting parallels can be drawn after meeting and speaking with many North and South Koreans about their opinions of political relations between the two countries.

While no direct correlation can be established between these films and South Korean perceptions of North Koreans, evidence from the survey and interviews seems to show that South Koreans uneducated in the matter are wary of North Koreans living in their society. North Koreans are jokingly referred to as spies and considered refugees who must assimilate to a competitive South Korean society despite sharing language and cultural roots. The impact of media representation on the livelihood of North Korean defectors must be considered by policy makers and educators working in South Korea. Likewise, film directors should reconsider how their works could positively bridge the gap in society between all Koreans. It is in South Korea’s own interest to make its citizenry more conscientious of the reality that their northern neighbors feel as if they are strangers in their own motherland. 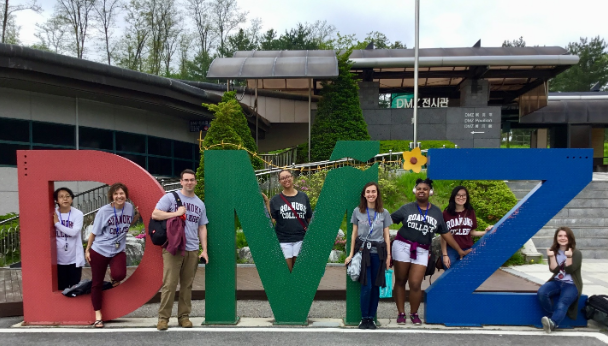 The Roanoke College research team spent the day touring the DMZ with a North Korean defector as our guide.

Strangers in Their Motherland: How Alternative Schools Are Making an Impact on North Korean Defector Students

Young North Korean defectors undergo many traumatic experiences during their defection to South Korea. In their journey from North Korea to South Korea, they may lose relationships with family and friends, experience the death of a loved one, be sold and bought by human traffickers, and face criminal prosecution. Upon arrival in South Korea, defectors are handed over to the Korean HANA Foundation, where they begin an assimilation process into South Korean society that teaches them to adjust to different cultural, technological, and educational standards. Students are asked in the assimilation process to identify a school where they prefer to continue their learning in preparation for becoming a productive member of South Korean society. While defectors gain some comfort level in navigating the intricacies of daily life in South Korea many still struggle with how to maintain a connection with their North Korean cultural traditions as well as overcome traumas associated with life before defection and during the defection itself.

This research paper discusses aspects of the defection process and examines what public schools and alternative schools are doing to help defector students overcome traumatic experiences and also avoid becoming a victim of school bullies. Alternative schools provide counseling and various forms of art and music therapy to help students cope with the memories of past traumatic experiences. Public schools in comparison typically do not employee counselors trained to provide specialized help to defectors plagued by hurtful memories of life before arriving to safety in South Korea. The Ministry of Education has passed a series of anti-bullying policies to deter aggressors, but many schools fail to enforce these policies adequately. Because of small class sizes and an empathetic learning environment that encourages students to focus on developing their own individual interests as opposed to seeking out negative information about peers for harmful purposes, makes it possible for administrators of alternative schools to dedicate less time and fewer resources to the enforcement of anti-bullying policies. 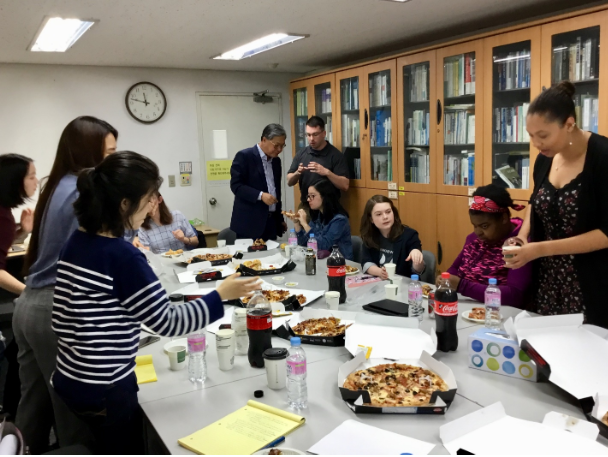 The Roanoke College research team gives a big “shout out” to Dr. Dae-Seok Choi of Ewha Womans University who hosted us for a pizza lunch and arranged for informal interviews with his students,  some of whom were North Korean refugees.

As more North Koreans escape from their home country to seek safety in South Korea, South Koreans are faced with the task of engaging with and providing for defectors who share the same history and native language as they, yet, are entirely unaccustomed to the cultural, political, and economic realities of living in a hyper-competitive South Korean society. The Hana Foundation and other organizations assisting in the resettlement process have identified adolescents and young adults as a unique group among defectors — young enough to be more adaptable to the societal changes they will encounter than adults yet more indoctrinated into the North Korean way of life than small children. For this project, under the guidance of Dr. Stella Xu and Dr. Whitney Leeson and funded by the Freeman ASIANetwork Grant, I spent three weeks of May 2018 in South Korea interviewing adult North Korean defectors, teachers of defectors, NGO workers, and scholars in North Korean studies in order to learn more about pedagogical strategies created for educating defector students. Having completed a literature review on general struggles faced by North Korean defectors during and after their long escape process — struggles that include psychological and physical health issues arising from trauma and maltreatment in North Korea as well as prejudice and culture shock in South Korea — I encountered similar information in my case studies of two educational organizations in South Korea: an alternative secondary school and a non-profit tutoring center for adult North Korean defectors. Overall, I found that although some pedagogical differences existed between the alternative school and the tutoring NGO, both institutions were uniquely student-centered and used an awareness of their students’ past and present struggles to create a system of education designed to help them heal from their experiences in North Korea, become acculturated to South Korean society, and share their personal narratives with those in their community and abroad.

Marrying the Revolutionary Woman: Juche Ideology and the Efficacy of Unification through Marriage

South Korea faces a unique problem: there are significantly more men than women. To solve this problem, the men of South Korea have turned to legal, and illegal, means of finding a wife. Marriage Tourism, the act of going abroad in search of a potential spouse from Mongolia or Vietnam, and matchmakers are especially prevalent phenomena. Given the presence of North Korean refugees, seventy percent of which are women, this project examines the ideal marriage pairing of a North Korean woman with a South Korean man as a case study for the cultural effects of Unification. Preliminary research found that the Choson Neo-Confucian expression “Nam Nam Buk Nyu” — Northern Woman and Southern Man — was used to advertise brokers that specialized in pairing refugee women with eligible Southern men. Additionally, popular TV shows such as “Now On My Way To Meet You,” “Moranbong Club,” and “Nam Nam Buk Nyuh” celebrated this cultural ideal. On site research however revealed that these brokers were operating illegitimately as scams and were either defunct or unreachable. Reputable marriage brokers, despite their advertisements, also appeared to operate in much the same way. Interviews with bachelors revealed a hierarchy of racial preference among South Korean men that placed North Korean women at the bottom. Additionally, refugees expressed a desire to secretly remain amongst themselves or assimilate entirely into the Southern population. Refugees were characterized by many as being impeccably strong willed and resilient. Investigation into Juche ideology, and interviews with a North Korean Juche scholar, indicate that such a portrayal is due to both Kim Il Sung’s attempts to empower the women of North Korea in the Revolution and a founding myth involving his wife. Ironically, it appears that his attempts to empower women to lead empowered them to leave.

Roanoke College students spent the day with Dr. Sung-Kyung Kim from the University of North Korean Studies learning about the movement of North Korean refugees into South Korea and the transnational networks that make the arduous journey possible.